Rubber Plant a flowering plant belonging to Euphorbiaceae, a plant family of which many members produce latex. Commercial rubber is produced from the latex of the plant Hevea brasiliensis. The plant is a tall slender tree which is native to South America but has been introduced and widely cultivated in South-east Asian countries such as Malaysia, Indonesia, Sri Lanka and parts of West Africa. Rubber is tapped from the tree as a white latex by making a slanting cut about a few millimetre deep in the bark of the trunk through which the latex is extruded. Hot humid climate with plenty of sunshine is suitable for rubber plantations. A rubber plant takes about 12 years to reach the tapping stage.

About 250 trees can be raised in one hectare of land. The spacing between trees is such that sufficient light, direct and diffused, is available in the rubber plantations to support a rich undergrowth of different herbs. Average yield of rubber from a single plant is about 2 kg per year.

Rubber plantation is a highly land-intensive undertaking so that in Bangladesh which has severe land constraints, only those pieces of land which is not used for production of food can be made available for rubber cultivation.

An attempt was made early in the 1960s to examine whether rubber plants would grow in the hilly regions of Chittagong district. Encouraged by the initial success of the trial, a more systematic cultivation project was undertaken as a pilot programme during the 1980s with experimental plantations having been established in Chittagong and Sylhet districts and in the Madhupur forest. Results of this particular study are yet to be fully evaluated. Commercial cultivation of rubber in Bangladesh as import substitute, therefore, still remains as an unresolved issue, but rapid depletion of arable land because of growing population pressure and resort of farmers to reclaim marginal land for food crop production, are the factors that have to be considered seriously in an objective assessment of the issue of whether rubber cultivation can be an economically viable undertaking for Bangladesh.

Rubber plantation attempts in Bangladesh is a story of mixed success. The tropical climatic conditions of Bangladesh, with high rainfall during the summer months, were thought to be congenial for rubber plantation. However, because rubber plantation is a relatively land-intensive undertaking, and Bangladesh does not have enough prime land to dedicate for this enterprise, it was decided during the Pakistan time to explore whether some of the marginal land available in hilly regions of the country, could be experimentally explored.

In parts of Chittagong forests, experimental rubber plantations were initiated in the early 1960s. The trial plants did grow well in local climatic conditions and the initial results were encouraging, but the activity could not be extended in more productive directions because of the intervening period of Bangladesh war of independence.

Serious attempts towards rubber plantation were again undertaken after Bangladesh earned its independence in 1971. Thus, in 1980 the Government took the policy of producing rubber as import substitute for which the Asian Development Bank came forward with financial support. At this time there were already about 5,100 ha of rubber plantation in the country and the new programme included the creation of another 5,048 ha of rubber estate. These rubber plantations were managed by the state-owned bangladesh forest industries development corporation (BFIDC). The operation of the project continued for about a decade largely as a pilot project to examine commercial feasibility of rubber production in Bangladesh. Results of this study are being evaluated and initial indications are that the project has failed to perform as per expectations. In the Madhupur forest area, out of a total plantation of 2.5 million saplings planted in 1987, only about 1.5 million survived as of 1999. 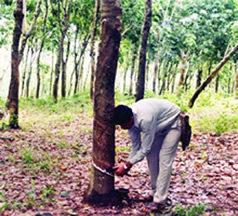 The plants have now reached tapping stage, but the entire plantation area is so barren because of negligence in management and human interference that there is little incentive to go for tapping because very little output is expected.

It is believed that from well-managed rubber plantations comprising 11,000 ha of marginal land, about one m ton of dry rubber per hectare (total 11,000 m tons) could be produced per year in the country under optimum conditions. But the cost of good management of the rubber estates and the price of the product relative to international market price appear to negate any bright future for rubber production in Bangladesh. One factor which substantially contributes to this negative projection is that because of severe land constraints (currently 130 million people in a total land area of about 148,000 sq km), it is highly unlikely that the volume of rubber production could be increased substantially by increasing acreage for rubber plantations in order that the scaling up of the production might make the product more cost-effective and competitive. It is at present being seriously considered whether rubber cultivation can be a worthwhile economic activity for the country. [Zia Uddin Ahmed]