Rural Electrification a major component of overall rural infrastructure aimed at accelerating the pace of socio-economic development of Bangladesh. In rural sector, it is identified by the policy planners of the country as a key programme. In the vision statement of the government it is stated that by the year 2020 electricity would be made available to all the citizens of the country. The rural electrification board (REB) was established in 1978 to expedite development efforts. Under the Rural Electrification Board Ordinance of 1977, all the areas of the country, except the municipal areas of Dhaka, Narayanganj, Mymensingh, Gazipur, Narsingdi districts, rajuk areas, industrial areas, divisional towns of Chittagong, Rajshahi, Khulna, Sylhet and Barisal with other district towns, cantonments and universities which are already electrified by Bangladesh Power Development Board (BPDB) are under the jurisdiction of REB. Based on the universal principle of cooperative, Palli Biddut Samities (PBS) of REB are formed as democratic, decentralised and autonomous organisations where the member consumers enjoy equal opportunities and are entitled to exercise equal rights. Continuous support from the government and donor agencies and the people associated with the programme and comparative transparent and accountable system of the PBS has helped to set a high standard of performance of the organisation. The owners of PBSs are its customer members and PBS management is accountable to a locally elected Board of Directors and the overall performances of the PBSs are controlled by REB. 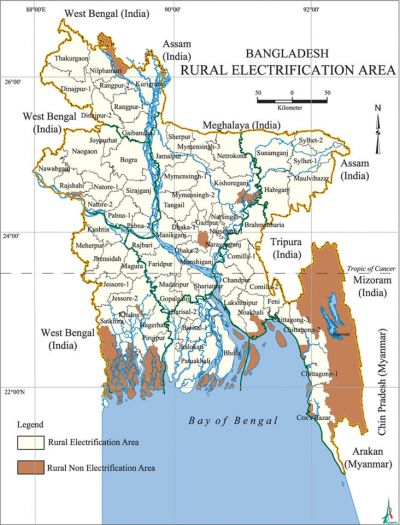 REB is basically running on funding from the government and development partners. Some of the PBSs are still not financially self reliant as most of their consumers are residential connection holders. A 'PBS Revolving Fund' was established with the help of financially sound Samities for the PBSs which are yet to be self reliant to reduce their dependence on government and development partners.

This fund is expected to play a positive role in expansion and operation of the weaker Samities. REB has been receiving continuous support and generous assistance from development partners of Bangladesh in all phases of the programme. National Rural Electric Cooperative Association of USA made the feasibility study for the rural electrification programme in 1976. Immediately after that United States Agency for International Development (USAID) provided funds of $79.2 million for constructing distribution system and other infrastructures for 13 PBSs to electrify 54 upazilas in the first phase of rural electrification. Since then USAID and the bilateral and multinational assistance continued to come forward with generous assistance. Among the bilateral/multinational fund providers USAID, KFAID, IDA, JDRG (Japan), OECF (Japan), IDB, OPEC, CIDA, SFD, ADB, NORAD and the government assistance from Finland, Saudi Arabia, France, Netherlands, and China are significant.

Bangladesh has been experiencing shortages of power for the past several years despite the fact that power generation capacity of the country has increased many fold over the years from 80 MW in 1960s to 3,803 (installed capacity) in 2000. Although the real generation at present is 2,800 MW of which approximately 20% is consumed by REB. REB receives supply from BPDB and Dhaka Electricity Supply Authority (DESA) at 33 kV level at a rate of Tk 1.84/kWh and Tk 1.91/kWh (base load) respectively. BPDB is the major supplier of power for REB. DESA supplies approximately 35% of REB consumption. The chronic power shortage has created increasingly serious economic hardship. During peak time it is common to experience shortages in power supply and the rural electric systems are hit the hardest. Over the past 10 years demand for electricity in rural Bangladesh has increased at an average of annual 19%. Over the next 10 years, this demand is expected to increase at 11% per year, from a current peak of 700 MW to nearly 1,600 MW in 2007. In addition, several hundred megawatts of electricity demand and thousands of customers will be transferred to rural sector from BPDB and DESA. Present target of REB is to construct annually 10,000-11,000 km transmission lines in the rural areas to cover more consumers.

In May 1998 a separate Generation Directorate was established at REB. Purpose of this set up was to develop generation projects for the benefit of PBSs and their consumers. REB has developed Rural Power Company (RPC) as its subsidiary IPP and a 140 MW gas based power plant is established at Shambhuganj, Mymensingh which has been producing and supplying power to BPDB since April 1999 Tk 2.15/kWh. Steps are being taken to increase the RPC plant capacity up to 210 MW. The RPC was established to strengthen the present generation capacity under financial assistance of Asian Development Bank and joint ownership of Rural Electrification Board and five Palli Biddut Samities. In addition REB has signed contracts for power purchase with three 10-MW IPPs under construction (one of the 10-MW is already on trial production) at Savar, Narsingdi and Comilla. Also eight more 10-MW IPP plants at 8 PBSs are planned to be set up. IPPs are to be run on build-own-operate (BOO) basis. The IPP produced power will be consumed by REB at a rate of Tk 1.61 to Tk 1.80 per kWh (base load).

Apart from taking electricity supply from national power grid, REB has taken initiatives to use Solar PV cells for producing electricity for remote and isolated islands like Karimpur and Nazarpur unions located by the river Meghna in Narsingdi under Narsingdi Palli Biddut Samiti-1. The Unions are far from the national grid and were selected for the pilot project to provide electricity through Solar Photovoltaic Systems with a French grant of $6.4 million and local currency support of about Tk 26.3 million. Under this programme about 1,000 members of various categories of solar power consumers were targeted for electricity supply. The Narsingdi Solar PV Pilot Project, the first of its kind in the country is designed to test technical and socio-economic prospects of solar PV Systems is Bangladesh. Since the rural network is characterised by a comparatively lower consumer density, it often becomes difficult and uneconomic to extend power lines to certain remote locations within the jurisdiction of a PBS. Some remote areas are not likely to be covered by grid network due to inaccessibility and low consumer density. Renewable energy technologies are considered as viable technical options for such remote areas especially for ensuring equitable development of all areas and different cross sections of socio-economic groups. REB is actively reviewing its Solar PV System achievements.