Sadi Mosque situated in the village of Egarasindur on the left bank of the old Brahmaputra in the present district of Kishoreganj, is one of the best-conserved mosques in the country. A Persian inscription tablet, fixed over the central mihrab, records that the mosque was built in 1062 AH (1651 AD) by one Sadi, son of Shaikh Shiroo, during the reign of shahjahan. 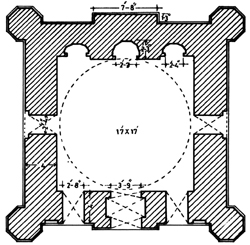 Measuring 7.62m. a side, the single-domed square mosque was built on a raised piece of land. There are three arched entrances in the east, and one each in the middle of the north and the south sides. The central archway, which is larger, is set within a slightly projected rectangular frame, but the flanking archways are contained within slightly recessed rectangle. The qibla wall is recessed with three semi-octagonal mihrabs, which correspond to the three eastern doorways.

The central mihrab, bigger than the side ones, shows a rectangular projection on the exterior side. All these mihrabs, not unlike the doorways, have arches of plain four-centred type. But only the central mihrab and the central doorway have applied cusped arches on decorated pilasters.

The cornices are pronouncedly curved in the Bengali fashion. The four walls rise above these cornices - a building style introduced in Bengal architecture during the Mughal period. The Sadi Mosque, in its eastern facade, presents a beautiful triangular pediment over the central archway, a feature that appeared earlier in Bengal in the shatgumbad mosque at Bagerhat. The four exterior angles of the building are strengthened with octagonal towers, which all rise above the parapets and terminate in small ribbed cupolas crowned with lotus finials. Ground plan, 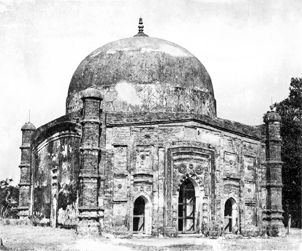 The square prayer hall is covered with a single squat dome on a circular drum, which is directly placed on the walls. The four upper corners are filled with the pendentives characteristic of Sultanate Bengal. The dome is crowned with lotus and kalasa finial.

The entire building is smoothly plastered over, excepting the doorways and mihrabs, which are beautifully ornamented with terracotta plaques. In the eastern facade the rectangular frame of the central archway is adorned with spiral scrolls with rosettes, while the spandrels of its beautiful cusped arch depict large tiered rosettes. Similar rosettes also adorn the spandrels of the flanking doorway arches. At either end of the eastern facade are three vertically placed rectangular panels, each containing a rosette within.

The mosque represents a happy blending of Mughal elements with the Sultanate architectural traits characteristic of Bengal. [MA Bari]