Samad, Laila (1928-1989)  journalist, litterateur, actress, was born in Kolkata on 3 April 1928. Her father, Khan Bahadur Aminul Haque, who hailed from Mirzapur village under the district of Dinajpur, was a government official of British India. Laila studied at Nari Shikshika Mandir and Sakhawat Memorial School, from where she passed the Entrance examination in 1942. She studied at Ashutosh College and Lady Brabourne College. She completed her BA later as an external candidate. In 1946 she married a cousin, Mirza Abdus Samad, a Communist Party worker, and moved to dhaka. In 1959 she did her MA in journalism from Calcutta University, securing a first class first. 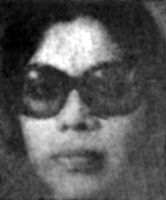 Few Muslim women took part in stage dramas in the fifties, but in 1951 Laila Samad acted in Jabanbandi, organised by the cultural council of Dhaka University. She also took part in Chhenratar (1953) and Kafer (1954). She produced and directed Buda Saliker Ghade Roun, Red Lantern O White Haired Girl and Ma. She also acted in radio plays. She was one of the founders of the Charoni drama group and the Dhaka Cine Club.

Laila Samad died on 10 August 1989 in Dhaka. In her honour, the Dhaka Ladies Club has instituted the Laila Samad Award.  [Anupam Hayat]