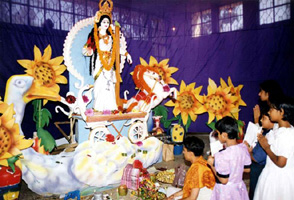 Saraswati Hindu goddess of learning and the wife of brahma, the Creator. She is represented as fair and wearing a white sari and a garland of white beads, the whiteness symbolising her purity. She carries a kachchhapi vina and is mounted on a swan. Saraswati is also known as Bharati, Vinapani, etc. As the goddess of learning, she is specially worshipped by Hindu students. Her devotees believe that even an ignorant person can acquire knowledge through her blessings.

Saraswati Puja takes place on Shripavchami, the fifth day of the lunar month, in Magh. Though her puja is mainly observed in academic institutions, some Hindu families also arrange this worship is privately.

During the puja, Hindu students place their textbooks and pens on her altar along with the sacred books. All general academic institutions remain closed on this occasion.

The Saraswati is also a river which meets the ganges and the padma at Prayaga, popularly known as Sabgama (confluence). This place is considered very holy by Hindus, who believe that they must visit Prayaga at least once in their lives. [S Ranganath]