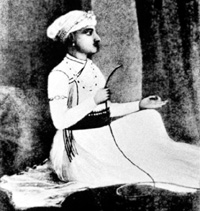 Sarfaraz Khan son and successor of Nawab shujauddin, ascended the masnad of Murshidabad in 1739 with the title of 'Alauddin Haidar Jang'. He was a deeply religious man but lacked the abilities of a good administrator. According to the advice of his father he did not bring any substantial change in the government. Haji Ahmed, Alam Chand and jagat sheth were retained in their respective positions. Taking advantage of Sarfaraz's weakness they engaged in a conspiracy to dethrone him. The conspiracy was, however, leaked out and Haji Ahmed was removed from the post of diwan. The disgruntled Haji brought within his fold alivardi khan, his younger brother and deputy subahdar of Bihar and Alam Chand and Jagat Sheth to conspire against Sarfaraz. Alivardi Khan received fabricated news of his elder brother's humiliation and was agitated. He obtained recognition from the Mughal Darbar as the subahdar of Bengal, Bihar and Orissa. At that time Delhi was in the grip of Nadir Shah's invasion, and in such a chaotic situation it was possible for him to obtain recognition from the Mughal emperor.

Alivardi Khan proceeded with a huge army against Sarfaraz. Before he finally dealt a blow on him, a letter was sent to the subahdar to the effect that Haji Ahmed and his family, who were still in Murshidabad, should be released and sent to Patna. This demand Sarfaraz fulfilled and Haji Ahmed united himself with his brother. Alivardi Khan, instead of being pacified after that, moved on with his army against the subahdar.