Sarkar, Abu Hossain (1894-1969) lawyer, politician. Abu Hossain Sarkar was born at Rangpur in 1894. His early education was hampered due to his active participation in politics as an activist of swadeshi movement when he was arrested (1911). He passed the entrance examination in 1915. Having obtained his graduation and B.L degree he joined the Rangpur district bar. 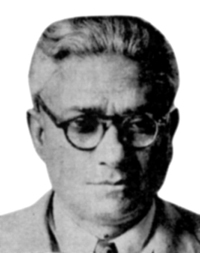 Abu Hossain Sarkar joined All India National Congress and had active role in national movement when he was imprisoned for several times. On some difference of opinion with the Congress leaders he left Congress politics and joined krishak praja party of AK Fazlul Huq in 1935. He was elected member of the Bengal Constituent Assembly in 1937 as a candidate of Krishak Praja Party. He had a vital role in floating Krishak Sramik Party headed by AK Fazlul Huq in 1953. He was elected a member of the East Bengal Provincial Assembly in 1954 as a candidate of united front. He was for sometime the Minister of Health in the central cabinet of Pakistan headed by Chowdhury Mohammad Ali in 1955.

Abu Hossain Sarkar was the chief minister of East Bengal from June 1955 to August 1956. Some of the outstanding measures of his government include the recognition of 21 February as Shaheed Dibash and its declaration as a public holiday, laying of foundation stone of the Central Shaheed Minar at the premises of Dhaka Medical College Hostel, and the establishment of bangla academy. Consequent upon the rise of price and shortage of foodgrains in the market allegedly caused by revocation of food rationing system by his government, there was a hunger march in the street of Dhaka, and he resigned on its very face (30 August 1956).

Abu Hossain Sarkar was the leader of opposition parliamentary party in the East Pakistan Provincial Assembly, and the president of Krishak Sramik Party from 1956 to 1958. He fell a victim to the EBDO imposed by the military government of Ayub Khan. He played a vital role in floating the National Democratic Front (NDF) headed by Huseyn Shaheed Suhrawardy in 1962, and had active participation in the movement for the restoration of democracy in the country. Abu Hossain Sarkar died in Dhaka on 17 April 1969. [Mofakkhar Hossain Khan]