Satgumbad Mosque located in the Muhammadpur area of Dhaka city, the building exhibits seven domes- three over the prayer chamber and four over the corner towers. Hence it is known as Satgumbad (seven domed) Mosque. 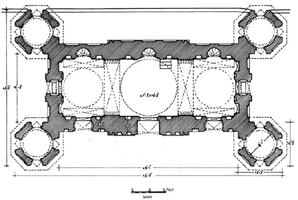 The mosque occupies the western end of a slightly raised masonry plinth 26.82m by 25.60m, which is enclosed by a low wall with a gateway in the middle of the eastern side. This arched gateway with flanking ornamental turrets is exactly in alignment with the central doorway of the mosque proper.

The top of the gateway could be approached from either the north or the south by an ascending flight of steps. The mosque proper forms a large rectangle 14.33m by 4.88m on the inside and is emphasised with massive hollow domed towers of octagonal design on the exterior angles. The prayer chamber is entered through arched doorways - three in the east and one each on the north and south sides.

Corresponding to the three eastern archways there are three semi-octagonal mihrabs inside the western wall. Beside the central mihrab there is a three-stepped masonry pulpit. The central archway and the central mihrab, including two other archways on the north and south walls, have outwardly projected frontons depicting ornamental turrets on either flank.

The interior of the mosque is divided by two wide arches into three conventional divisions - a large central square bay and a smaller rectangular bay on either side. The roof is covered with three slightly bulbous domes on octagonal drums, the central one being bigger than its flanking counterparts. The large central dome is supported by the wide arches together with the two blocked arches over the central mihrab and central archway and the triangular pendentives on the upper angles. But in covering the side rectangles with domes a clever method has been adopted. In order to make a circular base for the dome, the rectangular space has first been made square above by creating half-domed vaults on the east and west walls. These half-domed vaults together with a further series of pendentives on the corners directly support the small domes. 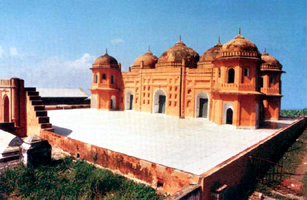 The corner towers have flanking turrets like those in Khwaja Shahbaz’s Mosque and musa khan mosque, both in Dhaka city. Each of these consists of two storeys and is a monument by itself. The lower storey is pierced with four cardinally set arched openings in the north-south and east-west axis. Internally the roof of the lower storey is domical, but its reverse side is flat and forms the floor of the upper storey. Roofed over by a dome with an expanded lotus finial the upper storey appears to be an exact copy of the lower one, but with a slight variation. In addition to the four axial openings the upper storey has an extra opening towards the roof. Through this opening one can reach the upper storey of the towers from the roof of the mosque.

The horizontal parapet and the drum of the domes are ornamented with rows of merlons. The eastern facade is embellished with panels in the usual Mughal style. The mihrab arches have beautiful cuspings on their faces. The rectangular frame, which encloses the central mihrab, is topped by a frieze of blind crestings. All the domes are crowned with lotus and kalasa finials and internally marked with a basal course of petals. The apex of the central dome has a large medallion decorated with a five-tiered rosette. The mosque does not have any gorgeous surface ornamentation like the north Indian Mughal examples, but it is still appealing for the graceful arrangement of its different component parts.

The inscription tablet of the mosque is now lost, so its exact date is not known. But in plan and other constructional details, save the hollow and massive domed corner towers, the mosque has the strongest similarities with some late 17th century mosques of Dhaka such as the Lalbagh Fort Mosque (c 1678-79) and khwaja ambar’s mosque (1680). On stylistic grounds it is suggested that the mosque was built sometime around 1680 AD. ' [MA Bari]