Sati Hindu religious rite of widow burning with the corpse of her husband. Literally, the Sanskrit word sati means a virtuous woman possessing supreme faithfulness to her husband. But institutionally, sati means the ritual compulsion of a wife to die with her dead husband and land on his funeral pyre in the midst of the trumpeting crowd of the ceremony. When and how the rite developed as a system of religion is not certain. The Greek writer, Diodorus (c 300 BC) has made an elaborate description of the arrangement of a sati, which persisted almost in the same way even in the eighteenth century. Anthropologists and historians are at one about the existence of the rite of human sacrifice in the past in many societies around the world.

It was the Rajputs who practised the rite most extensively. But in varying degrees it was observed by some castes of the Hindus of all provinces of India including Bengal. During the Turko-Mughal period, some attempts were made to stop the practice of sati, but no measure was ever successful. 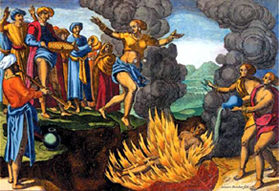 On account of religious neutrality, the East India Company Government was initially not inclined to take any measure against the sati rite, though they disapproved this inhuman practice. But with the establishment of the liberal government in England and the strengthening of the control of the British colonial state of India in the 1820s the Government was actively thinking in terms of making some enactments towards abolishing sati. The Christian Missionaries, Anglo-Indian press, and a limited number of reformist natives including rammohun roy had advocated humanitarian reforms. Supported by the Home Government, Governor General Lord william bentinck (1828-1835), who was himself a humanitarian reformist, enacted the Regulation XVII, 1829 which declared 'the practice of Suttee or the burning/burying alive Hindu widow illegal'.

But there is no reason to believe that sati system disappeared at once. A law may be enacted declaring some evil illegal, and yet its actual practice may remain unaffected for a long time. Sati was an institution of this genre. It was an ancient institution ingrained in the minds of the practicing Hindus and it could not be just abandoned because it was banned by a government decree. The Hindu public opinion condemned the measure as a grotesque interference into the religious practices of the people. A memorandum signed by hundreds of Hindus who felt injured by the Regulation was sent to British Parliament for remedy. But the Liberal Parliament firmly backed the Bentinck's reform measure. In spite of the ban, its practice persisted, though on smaller scale than before, until general public opinion against the institution developed over second part of the nineteenth century. The sati disappeared by the end of the nineteenth century and it was because of several important factors, such as spread of western education, rise of an educated middle class and launching of Hindu reform movements. [Sirajul Islam]