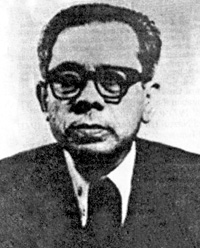 Sayem, Justice Abusadat Mohammad (1916-1997) President of Bangladesh. Abusadat Mohammad Sayem was born on 29 March 1916 in Rangpur. He had his school education at Rangpur Zila School, College education at Carmichael College, Rangpur, and Presidency College, Kolkata. He became a law graduate from the University Law College, Kolkata. He was enrolled as an advocate of the Calcutta High Court in 1944. After partition of India in 1947 and setting up of a High Court in Dhaka he shifted his practice to the Dhaka High Court and worked as a junior of veteran advocate Sher-e-Bangla AK Fazlul Huq.

Besides being the author of the book At Bangabhaban: Last Phase (1988) he had delivered many important judgments laying down the law. His most important judgment is in the Berubari Case in which cession of southern half of South Berubari union and the adjacent enclaves to India in exchange for Dahagram and Angarpota enclaves to Bangladesh under an agreement signed by the Prime Ministers of India and Bangladesh on May 1974, was challenged. Following that judgement Third Amendment to the Constitution was made to give effect to the agreement. Justice Sayem died in Dhaka on 8 July 1997. [Kazi Ebadul Hoque]