Sea Port refers to the establishment for loading and unloading of goods having anchorage facility for ships and embarkation and disembarkation facilities for passengers. Since 80% people of the world live within 100 miles of coastlines, seaports emerged as immense economic important places for people of littoral countries. That explains why seaports and cosmopolitan cities developed along the coastal belts since the ancient period.

Chittagong is one of the oldest ports in the Bay of Bengal region. At present Chittagong and Mongla seaports are the important structures for country's export import business. These two ports deal major portion of country's export import business. Chittagong port is considered as the lifeline of the national economy as 92% of export and import of Bangladesh is conducted through this port. The rest is carried out through Mongla and few other river and land ports. Large ships cannot dock in these two ports due to lack of deep sea facilities. For this reason' many exporters and importers of Bangladesh use Singapore. Cargoes are transferred between the Chittagong and Singapore ports by lighter ships.'

In this context, requirement of a deep-sea port for the country is felt to cope with the present trend of open market economy. Economists think that, deep-sea ports can change the whole import and export scenario of Bangladesh. Due to its geographical location, Bangladesh is important for other land-locked territories and countries of Asia. The Bay of Bengal has given Bangladesh some added advantages as traders from neighbouring countries conduct their businesses using Chittagong port.

Chittagong port is situated on 'the bank of' the Karnafuli and activities of ports are depended on the tides of the river. Karnafuli Channel is 9.5 nautical mile long and 500 meter wide. Ships can move through 300 m width, 9.2 m deep navigable water, and 188 m long ships can navigate through this channel. History of Chittagong port is very ancient. ibne batuta mentioned the existence of the port in his travelogue. The Chittagong port began its operation formally since 1887. It became a full fledged port in 1910 having four jetties with a capacity of 0.5 million tones cargo. Now Chittagong port is having 16 jetties. Among these there are six general cargo berths and 11 container berths. This port is now operated and guided by the rule of 1976 Ordinance. Container handling began in Chittagong port from 1978. At present, the amount of goods handling through container is being increased day by day. 2,67,18,834 metric tones of cargo were imported and 37,63,747 metric tones were exported through Chittagong port. Modern technology has been introduced for handling cargoes in containers. Before 2006 no modern ships except gear vessels (having own crane) could land to this port due to the unavailability of mechanisms fitted on jetty for loading and unloading. In 2007, four modern gantry cranes and Rubber Tired Gantry (RTG) were installed. When ships arrive in the outer anchorage the port's pilots bring the ship to the jetty and again accompany them up to outer anchorage while going off. When ship comes to the respective jetty, cargoes are loaded and unloaded under the supervision of port traffic department and custom formalities for taxes are completed. Timely dredging of the channel is mandatory to keep this naturally created port operational. Spots for dredging are divided in several sections. These are namely inner bar, outer bar, hidden bar and that need to be dredged regularly. Local sand businessmen dredge the channel regularly. In fact these manual dredging by local inhabitants still keep the channel operational.

Mongla port Established in 1954 it is located at Mongla on the bank of Pashur River, 48 km south of Khulna and 70 nautical miles from the Bay of Bengal. Ships of 200 meter long and 7 meter can navigate here. Bangladesh government is taking special care to improve the port facilities since 2009. Already Rupsha Bridge connecting the national highway and Khulna city has been opened for movement of transports. Various development projects for the improvement of automatic lighthouse, latest telecommunication centre, road transport infrastructure, multipurpose jetty, ICD, dredging, river channel and anchorage enhancement facilities project have been taken up. About 40% of food, fertilisers including other goods are imported through this port. An agreement of taka 2 thousand million has been signed with a foreign company for the overall development of the port within 20 years. There will be also a railway link between the port and Dhaka city over the planned Padma bridge in future.

The government is trying to provide transit facilities in this port to the traders of India, Nepal and Bhutan. The cost of handling goods and the tax of Mongla port are less than Chittagong, Mumbai and Singapore ports. For handling of goods in Mongla port, ships need not to stay for a long time in the outer anchorage. Here facilities for loading and unloading of goods from either sides of the ship are available in the outer anchorage. If barge facilities activates, the Mongla port users will enjoy more independence. In Mongla port, for handling and preservation of goods and containers, necessary facilities like mechanical equipment, transit shades, ware houses and container yards are available. Mongla port is capable to operate and handle 33 ships at a time. Again 35 vessels can get assistance to enter, exit and anchor within the mooring areas. 6.5 million metric ton goods can be discharged in a year through this port. Continuous dredging and increasing navigational facilities of channel for movement of vessels are two urgent requirements for the port users.

Deep sea port In the 1960s a proposal of constructing of a deep sea port in Kutubdia channel was submitted to the government. Still Bangladesh could not construct a deep-sea port. Construction of deep-sea port was never appeared as a strong issue after independence. The governments after 1990s, several times talked about deep sea ports, but no action was taken to materialise the issue. The present government has started working regarding the construction of deep-sea port. Japanese specialists have suggested the Sonadia Island as a suitable place for deep-sea port instead of Kutubdia. Because the amount of silt accumulated at Kutubdia per year is alarmingly high and a lot of money will be required for regular dredging. In addition to that another 200 meters of channel need to be prepared to maintain proper navigation. Again for construction of deep sea port in Kutubdia, a huge amount of people need to be relocated and that involves a huge amount of money for acquiring land and payment of compensation. In case of Sonadia there is no need for acquiring land or paying compensation. So considering the whole scenario specialists have finally selected Sonadia as the appropriate location of deep-sea port. 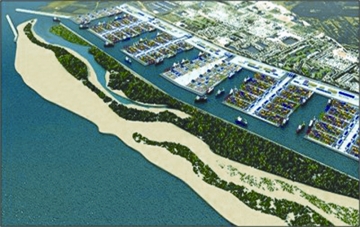 Several countries including India, China and USA have shown interest in construction of deep-sea port. According to the plan of present government, the project namely deep-sea port will be accomplished in three phases within 2055. The government expects that the first phase of the project will start within 2012. The estimated expenditure is assumed to be six hundred thousand million taka. According to the shipping ministry, a project of 150 thousand million taka is included in ADP as a first phase of construction of deep-sea port. 30% of the total expenditure of the port will be sponsored by Chittagong Port Authority (CPA). It is expected that the rest 70% will come from government and private participation (PPP). It may be mentioned that after the completion of first phase, expected to be completed in 2019, the business and port activities will be facilitated through 11 jetties and 8 berths. The second phase will start in 2020 and finish within 2035, during that time another 25 jetties and berths will be added to this port. The work of third phase will start from 2035 and continue upto 2055 to enhance the number of jetties and berths to 96. Then total 96 ships will be able to anchor and will have the provision of loading and unloading of cargoes at a time. Concerned specialists expressed that after the completion of first phase, economy of the country will achieve 1.5% GDP. In addition 18% to 30% transportation cost will be reduced in export-import business. This will have a positive influence on the price of the local commodities. Thus general people will be benefited directly from deep-sea port.

A panoramic sub city of about seven square miles of Moheshkhali will grow around Sonadia deep-sea port; where there will be every necessary structure for export import business. One grand road will be constructed from Moheshkhali via Chittagong- Cox's Bazar to Dhaka and about 70 km railroad will be constructed from Dohajari to Moheshkhali. To facilitate the transportation of containers and consumer goods to Dhaka already one internal container depot (ICD) has been constructed in Pangaon beside Buriganga river. And when first phase work of deep-sea port will be accomplished Bangladesh will be able to handle at least 7.41 million ton containers per year in place of present one million tones capacity. When the total work of deep-sea port will finish, the capacity of container handling will rise upto 325.2 million tones. In that case every 300 metre berth will have six harbors. Five cargoes and four container ships will be handled at a time in each harbor. The harbor will be three times larger than the present New Mooring container terminal.

After construction of the deep sea port both Bangladesh and Haldia or Kolkata ports of India will be benefited for cargo handling. Cost of export import and cargo handling will be saved so that trading between their seven northern states of India will be enhanced. In addition transporting cargoes to Myanmer and to Unan province of China will also be benefited. Economists think that construction of deep-sea port will have a definite positive influence on local economy. Deep-sea port construction will have positive influence on our GDP from different corners as seven days lead-time will be reduced in export import business. The mother vessels which cannot enter the Chittagong port at present will anchor at the deep-sea port. The present volume of 30 billion US$ export-import business will be doubled by 2020. The positive growth of foreign trades of neighbouring India and China will be huge in future, and eventually the landlocked states of these two gigantic countries (North East region of India and Southern region of China) will have to get services of the deep sea port of Bangladesh. Deep-sea port will play a vital role for the economic development of Bangladesh like Singapore, Hong Kong and Sri Lanka. China and other development partners have already expressed interest in helping Bangladesh regarding a building of deep-sea port. [Khandakar Akhter Hossain]