Sen, Nabinchandra (1847-1909) poet, was born in Noapara village in chittagong on 10 February 1847. He passed the Entrance examination (1863) from Chittagong School, FA (1865) from Presidency College in Calcutta and BA (1868) from General Assembly's School. He taught briefly at Hare School in Kolkata before joining government service as deputy magistrate. He retired in 1904. 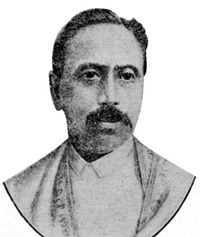 Nabinchandra started writing poems while still a student. His poems used to be published in the Education Gazette edited by Peary Charan Sarker. His first volume of poems was published in 1871. His poem Palashir Yuddha, published in 1875, made him famous instantly. His other major publications are the epics Raivatak (1887), Kuruksetra (1893) and Prabhas (1896). The hero of these epics is krishna. Though best known as an epic poet in the tradition of michael madhusudan dutt, Nabinchandra wrote many remarkable lyric and narrative poems, marked by a sense of nationalism.

Nabinchandra’s other books include his autobiography Amar Jiban, and the biographies on Khrister Jibani (The Life of Christ) and Cleopatra. Though Amar Jiban is an autobiography it reads like a novel. It also documents contemporary society, politics and administration. His other well known books include Bhanumati and Prabaser Patra. He also did a verse translation of the bhagavadgita and Chandi. Nabinchandra Sen died on 23 January 1909. [Bimal Guha]