Shah Muhammad Mosque is situated at Egarasindhur under Pakundia upazila of Kishoreganj district, less than half a kilometre to the east of the Sadi Mosque (1652). The mosque is now in a better state of preservation due to a series of repair works by the successive Departments of Indian, Pakistan and Bangladesh Archaeology.

The mosque stands at the back of a slightly raised platform, which is enclosed by a low wall with a gateway in the east. The gateway consists of an oblong structure with do-chala roof.

The mosque proper is a square structure, 5.79m a side in the inside, and is emphasised with octagonal towers on the four exterior angles. All these towers, shooting high above the roof and terminating in solid kiosks with cupolas, were originally crowned with kalasa finials, still intact in the southwestern one. The eastern facade is pierced with three arched-doorways having cuspings in their outer faces, while there is only one on either of the north and south walls. 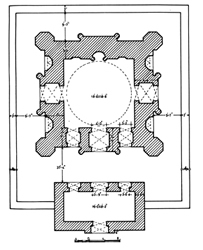 The western wall accommodates inside three mihrabs - the central one semi-octagonal and the side ones rectangular. The central doorway and the central mihrab are larger than their flanking counterparts. The mosque has four axially projected frontons, each corresponding to the centrally located doorways and the central mihrab. Each of these frontons is again distinguished by bordering ornamental turrets on its either flanks, which are carried beyond the parapets. The parapets and cornices are horizontal in the usual Mughal fashion.

The building is roofed over with a large dome on an octagonal drum, the dome being crowned with expanded lotus and kalasa finial. The drum of the dome rests directly on small half-domed squinches and blocked arches springing from the waist of the walls.

The do-chala gateway building is now smoothly plastered over, while the mosque proper is enriched with both plaster and terracotta designs. The eastern facade of the mosque depicts at either end horizontal rows of arched panels, each being marked with plant motifs in terracotta. The three eastern doorways were originally decorated with terracotta, still preserved in the central archway in decaying condition. The outer surface of the remaining three walls are distinguished by shallow large panels - both square and rectangular. Raised bands divide the corner towers, while their faceted kiosks on the top are marked with blind arched-motifs. The flanking turrets of the projected frontons depict jar-shaped pedestals. The parapets and the octagonal drum of the dome are adorned with frieze of blind merlons. 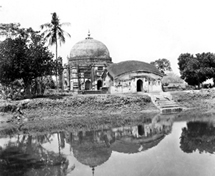 All the mihrabs are enriched with terracotta decoration. The mihrabs are arched having cuspings in their outer faces. The pilasters, supporting the mihrab arches, show a series of decorated bands topped by a frieze of petals. The spandrels of these arches, though now plain, must have been originally enriched with terracotta plaques. The mihrab niches are internally divided by moulded bands into a series of panels, which depict varieties of plants. And the whole mihrab composition is enclosed within a rectangular frame, the frame being filled with intersecting scrolls forming loops with flowers. Above the rectangular frame of the central mihrab there is a row of arched-niches filled with varieties of small trees containing flowers.

The squinches and blocked-arches, which carry the thrust of the drum of the dome, are beautifully cusped. The octagonal drum and the dome above are internally demarcated by a raised band, which is topped by a row of merlons and followed by a frieze of arched niches. And the apex of the dome inside is depicted with a large tiered rosette.

The mosque should specially be noted for its four axially projected frontons with bordering ornamental turrets, a device which must have been borrowed from the four axial iwan-type gateways of the Persian influenced north Indian Mughal standard mosques of Fathpur-sikri, Agra and Delhi. It is in this particular feature and also in plan the mosque compares well with the allakuri mosque (c 1680) at Dhaka. Stylistically therefore Shah Mohammad's Mosque at Egarasindhur may be dated sometime around 1680 AD. [MA Bari]