Shahbag was the garden-house of the nawabs of Dhaka. It was established in the area, which is now the site of Dhaka University's Teachers-Students' Centre (TSC), Arts Faculty, Institute of Business Administration, the Institute of Fine Arts, and the bangladesh national museum. During the Mughal period, Bag-e-Badshahi comprised the area where now stand the high court, and bangladesh shishu academy. Sujatpur Palace was situated in the bangla academy and TSC areas. Later, Nuruddin Hossain set up Nurkhan Bazar on the northern side of Sujatpur Palace. The vast meadow between Bag-e-Badshahi and Sujatpur Palace was known as Ramna. Aratun, an Armenian, and Griffith Cook, a British Judge, constructed two garden-houses in the Sujatpur area in the first part of the 19th century. In 1840 khwaja alimullah, father of Nawab khwaja abdul ghani bought these two garden-houses. 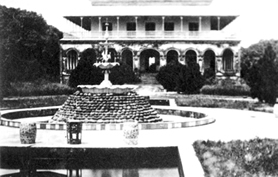 In 1868 Nawab Abdul Gani handed over the responsibility of the zamindari to his son khwaja ahsanullah. He decided to construct a garden-house according to his own plans and in 1870-71, bought the present Arts Faculty area of Dhaka University from the son of Nuruddin Hossain for this purpose.

The area to its north was bought in 1876-77. The total area measured about two hundred bighas. The construction of a garden-house was started in 1873. Several years were needed for its completion. Replicating the luxurious Bag-e-Badshahi of the Mughals, Abdul Gani named the new garden-house 'Shahbag'. Paribag Garden-house was constructed on the northern side during the time of Nawab khwaja salimullah.

A wall around the garden-house provided security. Within the compound there were a number of mansions, having drawing rooms with marble floors and platforms. The narrow serpentine lake in that area ran for several kilometres. There were also a few natural as well as embanked large water tanks. Some of the tanks had round shaped islands with canopies in the middle and a bridge connecting it with the bank. The water tanks were adorned with a fountain and fishes of various colours and varieties.

The entire garden was decorated with different lofty trees and flower plants, both local and foreign. Fascinated by the splendour of the garden, two contemporary poets - Obaidullah Surhawardy and Abdul Gafoor Nassakh - composed poems about them.

The most attractive mansion in Shahbag was a two-storied building called Israt Manzil. The delegates to the All India Muslim Education Society Conference, held at Shahbag in 1906, were welcomed here. The present day Madhur Canteen, situated in the northeastern part of the Arts Faculty compound of Dhaka University was the Jalsaghar of this garden-house. The floor and the spacious surrounding area of the building were covered with marbles. The building was also called 'Skating Pavilion' since members of the nawab family used to skate there. Two circular rooms of the period have survived.

A family museum in a two-storied building in Shahbag called ‘Nishat Manzil’ used to house rare collections. The circular stable (now extinct) on the southern side of the present Katabon Mosque was an adjunct of the Shahbag garden-house. Apart from the horses of the nawab, horses of other competitors who used to take part in races were kept there. The Race Course Ground, situated on the eastern side of Shahbag, was also owned by the nawabs of Dhaka. Feasts and ball dances were organised for the Sahibs and Memsahibs who used to come here for horse races. A zoo was also set up by the nawabs at Shahbag. 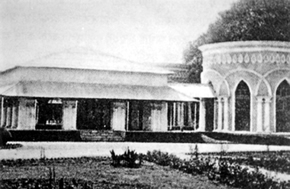 An exhibition of agricultural and indigenous industrial products used to be held every year on the occasion of the Christian New Year at Shahbag from 1875 onwards. Awards for the best animals and birds as well as for agricultural products were given on behalf of the nawab to participants in the exhibition. Shahbag used to be decorated beautifully on the occasion. The nawab hired dancers and singers to entertain the audience. There were arrangements for Jatra (folk-drama) Putul Nach (doll-dance), Magic shows and Bioscopes. Except during exhibition time, ordinary citizens were not allowed entry to Shahbag. However, with the permission of the authority one could visit the zoo. From 1921 Paribanu, a nawabjadi (a daughter of a nawab) opened the doors of the garden for the elite women of Dhaka each Saturday. Although Dhaka City had the benefit of electricity through the courtesy of Nawab Ahsanullah in 1901, Shahbag could not be connected with the system until separate generators were set up for the area.

Shahbag was the nucleus of the social, cultural and political activities of Dhaka's elite from the end of the 19th century to the early part of the 20th century. In addition to the family functions of the nawabs of Dhaka, receptions were held here for welcoming or bidding farewell to dignitaries who used to visit Dhaka. Bailey, Lt. Governor of Bengal, and lord dufferin, the Governor General, were accorded receptions on August 21 and September 26, 1888 respectively. Receptions were held on 24 February 1891 and 20 July 1894 for charles elliott, Lt. Governor of Bengal, and on 21 July 1902 for Woodburn, Lt. Governor of Bengal. Maulvi Delwar Hossain, Inspector General of Registration was given a reception at Shahbag on the occasion of his visit to Dhaka on 25 January 1896. lord curzon visited the garden-house on 19 February 1904. In a meeting held on 14 and 15 April 1906 and attended by five thousand Muslims of the region, the Provincial Muslim Education Committee for East Bengal and Assam was formed under the initiative of Nawab Salimullah. In the same year he initiated the formation of the muslim league in the meeting of the All India Muslim Education Committee held in Shahbag. Bailey, Lt. Governor of East Bengal, was accorded a reception here on 23 July 1908 and was given a farewell on 21 March 1912. Under the leadership of Nawab Salimullah, the Muslim delegation of East Bengal met lord hardinge, Viceroy of British India at Shahbag on 31 January 1912. In that meeting the Viceroy announced that a University would be establishment at Dhaka. lord carmichael and Lord Ronaldsay were accorded receptions here on 31 January 1914 and 14 February 1922 respectively.

After the death of Nawab Salimullah in 1915, the zamindari of the nawabs of Dhaka declined rapidly. Shahbag began to lose its grandeur due to paucity of funds. Because of family feuds, the garden-house was divided among the co-sharers. Nevertheless, social and cultural functions were held at Shahbag on and off till the 1940s. [Mohammad Alamgir]