Shahjahan (1628-58) Mughal emperor, succeeded jahangir in 1628 and ruled up to 1658. Born of a Rajput princess in 1592, Shahjahan was the third son of Jahangir and was named Khurram. Jahangir gave him the title of Shahjahan in recognition of his abilities during the campaigns against Mewar and Ahmadnagar. 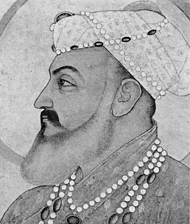 Jahangir's death in 1627 was followed by a struggle for the throne between his surviving two sons, Shahjahan and Shahriyar. Thanks to the diplomacy of his father-in- law Asaf Khan, Shahjahan ascended the throne at Agra with the title of Abul Muzaffar Shihabuddin Muhammad Shahjahan in 1628. He followed a policy of expansion against Assam and Arakan in the northeast. He sent qasim khan jwini (1628-1632), azam khan (1632-1635), islam khan mashhadi (1635-1639) and Prince shah shuja (1639-1660) as governors of Bengal.

The Portuguese were allowed to trade in Bengal and establish factories at hughli but their menace caused a serious concern for the Mughals. Grossly abusing the concessions, they oppressed the local people and captured and sold many of them as slaves while their missionaries took recourse to forcible conversion. The Firingis (Portuguese pirates of Chittagong) fought against the Mughals for the king of Arakan. They also fortified their settlements at Hughli and indulged in piracy in the rivers of Bengal and particularly in the Bay. Shahjahan was acquainted with the problems relating to the Portuguese when he visited Bengal as a rebel prince. Following the order of the emperor, Qasim Khan drove them out of Hughli (1632), many of them fell fighting and the survivors were taken prisoner. The Portuguese were allowed to return after a year but they came with much lessened strength.

During the governorship of Islam Khan Mashhadi, Pratap Singh, the king of Assam, took an aggressive policy supporting the cause of Parikshit Narayan in his bid to recapture Kamrup from the Mughals. Several military engagements took place between the two sides and at last the Assam King was compelled to make peace with the Mughals and surrender Kamrup. The Magh pirates caused depredations in southeast Bengal with the help of the Portuguese stationed in Chittagong. On the approach of Islam Khan Mashhadi against them they fled away.

Islam Khan Mashhadi left for Delhi in 1639 and was succeeded by the emperor's second son Prince Shuja. During the prince's viceroyalty agriculture and commerce prospered and peace prevailed. The enemies of the Mughals beyond the northeastern frontier did not dare to disturb him and there was no serious threat from outside. The English east india company received free trade rights in Bengal under him and set up commercial outposts at Balasore, Hughli and Pipli. Shuja transferred the capital of Bengal from Jahangirnagar to rajmahal. In 1642, Orissa was also placed under his control. During his viceroyalty many Persian noblemen, scholars and administrators, who were devout Shias, arrived in Bengal.

In the wake of the illness of Shahjahan a civil war broke out among his four sons to decide the question of succession. Shuja was the first to crown himself at Rajmahal. In this war of succession he had to fight twice-first against Dara and then against aurangzeb. Dara's forces defeated Shuja at the battle of Bahadurpur and the latter had to return to Rajmahal. In the meantime Aurangzeb, in alliance with Murad, won successive victories. He kept the emperor at the fort of Agra almost under house arrest, imprisoned Murad in the fort of Gwalior and crowned himself in Delhi. On the accession of Aurangzeb Shuja tried his luck again but, badly beaten at the battle of Khajwah, retreated. Hard pressed by the imperial forces, he had to take refuge in Arakan where he perished with his family probably at the intrigues of the king.

A man of refined tastes, the building activities of Shahjahan found expression in the Taj and other monuments, gardens etc. The famous Peacock Throne speaks of the pomp and grandeur of the reign of Shahjahan. Shahjahan lived about eight years after Aurangzeb's accession and died in 1666. [KM Karim]