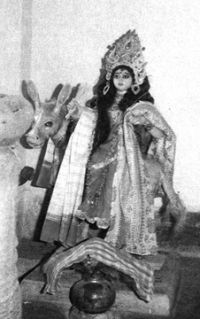 Shitala a popular deity, widely worshipped in rural areas of Bengal as the goddess of pox. Folk people believed that worship of Shitala could stave off diseases like pox; and her worship during an outbreak could reduce the severity of the disease. However, Shitala has lost followers after the introduction of modern cures to the diseases.

Shitala is worshipped on the sixth lunar day, known as Shitala Sasthi, the day after the Shripavchami, of the Bangla month Magh. Cold (shital is the Bangla word for cold) or cold offerings are made to the goddess. Shitala is described in the Pichchhilatantra of the Skandapurana as fair-complexioned, riding on an ass, holding a water-filled pitcher in one hand and a broom on the other. Her followers believe that she sprinkles the nectar-mixed water with the broom and dispels disease and sufferings.  [Paresh Chandra Mandal]