Shiva was a non-Aryan god and was worshipped by the ancient Indians before the advent of the Aryans. Shiva, however, soon found a place in the Aryan pantheon. He is mentioned in the Vedas as Rudra, becoming known later as Shiva or Mahadeva (Great God).

Shiva is close to the common people and his association belong mainly to the lower classes. Unlike the Vedic gods, he is not portrayed as regal. He appears in the guise of a poor hunter, wearing a tiger skin, with a deerskin as his headgear. His hair is matted and he has a snake coiled around his neck. He carries a variety of weapons in his hands. The purana stories describe Shiva as so poor that he has to beg. 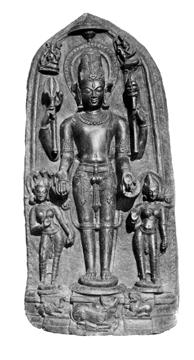 Shiva is volatile, quick to get angry over trifles but also as quickly pleased. He has a soft heart and responds easily to those who ask for his help. Sometimes, he falls into predicaments because of his generosity. One of his legends describes how a boon granted by him to the demons Vrtra and Vana caused havoc. The demons had finally to be killed by Indra and Vishnu. His wife is Sati (also known as Parvati, Uma or Durga) and their children are Kartik, ganesh, Laksmi and saraswati. Shiva’s family life is very similar to Bangali family life. Like Bangali couples, Shiva goes with Parvati to visit his father-in-law’s house. No other god has such family relationships.

Shiva's sense of pride is also very strong. When his wife Sati killed herself because her father had insulted Shiva, Shiva first wreaked havoc and then started his terrible dance with his wife's dead body. Vishnu used his weapon to cut Sati's body into pieces. The pieces of Sati's body fell on different spots, which became sacred places, 51 places of prime importance and 26 of lesser importance.

Legends narrate Shiva's many daring feats, mainly undertaken to help human beings. According to one story, Shiva saved the world by gathering up in his mouth all the dangerous poisons of the turbulent sea. He did not swallow the poison but held it in his throat till it turned blue. This is why one of his names is Nilkantha (Bluethroated). He also became known as Tripurari after he killed the demon Tripur. His other names derive from similar feats. He is known as Mahadeva because he is the greatest of the gods. As the trident or trishul is his main weapon, he is called Shulapani. He is also called Pinaki because he had a bow called Pinak. Since he is the god of all living beings he is also known as Vutnath or Vutesh. His name Ashutos comes from the fact that he is easily pleased. He is happy if a devotee offers him a leaf of a wood apple tree. Shiva is portrayed as simple, satisfied with what little he has. This is why he is also called Bholanath.

Shiva is also known as Mahakal as he destroys and creates, with a new creation arising out of destruction. In his destructive mood he plays a horn and a drum. He is a practitioner of yoga, and is represented as a sannyasi who has renounced everything and is engaged in deep meditation. He is Nataraj, the king of dancers. His dance of destruction is also his dance of creation. His image as Nataraj is greatly reverenced by dancers. Shiva is also the creative, generative principle and in this aspect he is represented by the phallic symbol of the lingam.

Several books in Sanskrit and Bangla have been written about Shiva. Among them Shivapurana and Libgapurana are more noted. In the Bangla mangalkavya, the story of Shiva is an essential component of the canto about gods. Shiva is worshipped on a number of occasions, such as Shivaratri in Magh. Fairs are often held on this occasion and offerings made to his symbol of the lingam. Shiva is also worshipped in Chaitra, on the occasion of Shiver gajan. Shiver Gajan is still observed today in many parts of the country. There are Shiva temples in Dhaka and elsewhere in Bangladesh. Childless women of both Muslim and Hindu communities visit these temples, believing that Shiva can make them fertile. [Paresh Chandra Mandal]