Shola Craft a folk craft of Bangladesh. The craftsmen use spongy stem of shola plants which grow in marshlands or paddy fields. Its scientific name is Aeschymene aspera. Shola plants have an important role to play in the natural and social environment of the country.

There is a legend about the use of shola crafts. It is said that while going to wed Himalaya's daughter Parvati, shiva desired to wear a conical white hat. As the celestial artist Vishvakarma began looking for an appropriate material to make the hat, a kind of plant grew in the wetland as desired by Shiva. This was the shola or spongewood plant. But Visvakarma was used to working with only hard materials like stone or wood and not with soft shola. Once again at Shiva's desire there appeared in the marsh a handsome youngman and he was named Malakar. All those who are now connected with the shola craft are thus known as malakars and belonging to the Hindu community. Traditionally, the malakars made a variety of hats, ornaments for the deities, background scenery for idol worships, temple decorations, garlands, toys and decorative pieces for homes with shola. Blacksmiths and carpenters are worshipers of Visvakarma but malakars worship Shiva as they believe they owe their existence to Shiva and therefore are obliged to worship him. 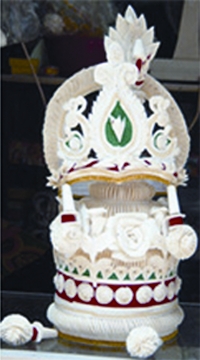 Almost the whole of the shola plant is its stem. Its bark is grey and inner body white. It grows to a height of 5-6 feet. The circumference of the stem is 2 to 3 inches long. There are two species of shola: kath shola and bhat shola. Kath shola is rather hard but bhat shola is light in weight and soft. Areas in Bangladesh famous for shola craft are Manikganj, Keraniganj of Dhaka, Munshiganj, Comilla, Brahmanbaria, Kishoreganj, Netrokona, Maulvi Bazar, Habiganj, Jamalpur, Sherpur, Jessore, Rangpur, Dinajpur and Barisal. The area of old Dhaka where malakar craftsmen once lived became known as Malitola although there is not much evidence of the craft there these days. Instead quite a few craftsmen of the Shankhari Bazar area of the city are now famous for shola work. They are Prakash Sur, Ovi Sur and Tapan Nandi. Prakash Sur and Tapan Nandi are well-known for their delicate craftsmanship. They make a variety of shola products according to the demand of society. Tapan Nandi is deft in making ornaments for deities, their background scenes, and in designing their costumes.

Tapan Nandi does most of the puja pandal decorations of the Shankhari Bazar area. Shola hats and wedding garlands made by Mahadev Malakar and Shankar Malakar of Hazrahati village of the Shatapara area of Magura district are famous for their delicate and intricate craftsmanship. Gopendranath Chakravarty of Arpara village of Kushtia district is also an expert shola craftsman.

Not much equipment is required in shola craft. A sharp knife and a piece of stone or wood are enough. First, the shola is cut into pieces with knife. Then, with the help of the knife a fine strip of shola is taken out and cut to make various motifs of flowers. To make hats, birds, ornaments and background scenes the cut strips are pasted together and then moulded into various shapes and sizes. The craftsmen themselves make pasting gum from the tamarind seeds. These days they also use gums from the market.

To make the shola craft attractive malakars use colour, zari threads and glitters. At Shankhari Bazar, an all-shola wedding hat is sold at Tk 400-500. Such hats are usually bought by upper middle-class Hindus. Shola garlands are also used in Hindu weddings. At religious festivals images of deities are painted on canvas made of shola. These images are known as 'ghata chitra', 'karandi chitra', 'mukha chitra' etc. At times the images of ganesh, shitala, manasa, Kartika and Chamunda are also painted.