Sindur (vermilion) blood-red powder, usually smeared on the forehead and at the parting of the hair (sithi) of Hindu married women. This is part of the marriage ritual and is inherited from ancient tribal cultures. It was inconceivable in many tribal communities that a marriage would take place without the use of vermilion as a ceremonial seal to the wedlock. According to the practice in some communities, marriages are solemnised by putting vermilion on the forehead and sithi of the bride as the priest prays to god for happiness of the couple. This is done without incantation of any hymns. According to the custom of the Kharia tribesmen, after a bride is given away by her parents, the couple stand up and smear each other's foreheads with vermilion seven times and garland each other as their dresses are knotted amidst playing of drums. After the bride is given away, the groom puts vermilion on the bride's sithi with the help of his little finger seven times. 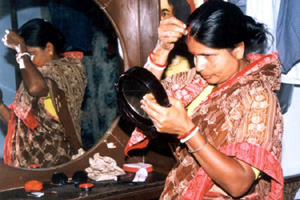 A woman having vermilion on sithi

Among the Bhumij tribesmen, marriage is performed by a priest's incantation of hymns and giving away of the bride. The groom then puts vermilion at the bride's sithi three times with the help of his little finger. Next, the hands of the couple are joined together.

In a marriage of the Ho tribe the groom must put vermilion on the forehead or at the sithi of the bride. A Ho boy with the help of his friends may forcibly bring a girl home and put vermilion on her forehead to validly claim to have married her. Even putting vermilion forcibly by a boy on a girl’s forehead in any public place like a market or a fair would make her his legal wife. However, this practice is discouraged these days. According to the Birho community’s wedding custom, the little fingers of the groom and the bride are pricked so that a drop of blood of each can soak a piece of cloth with which they can touch their throats three times.

The groom then puts three drops of oil on the soil and puts vermilion powder on them. This oil-soaked vermilion is then smeared on the bride's forehead and sithi to conclude the wedding and establish full rights of the groom over the bride. Among the munda tribe, the groom and the bride use vermilion to paint three bright red lines on each other's forehead and then exchange garlands to seal their wedding. Mahalid tribe's custom is that the groom puts vermilion at the sithi of the bride five times after paying dowry to her father. This concludes the wedding.

santals have varied customs of marriage but vermilion is common to all. Usually, the groom drops vermilion on the soil three times and puts it at the sithi of the bride as many times keeping the Sun-god as witness. In the event of the parents of either side not consenting to the marriage of the two lovers, the boy may forcibly put vermilion on the sithi of the girl to claim her to be his legally wedded wife. Santals believe that a girl can receive vermilion on her sithi from a boy only once. In the case of marriage with a widow, vermilion is not put at her sithi; instead it is put on a white flower three times before the flower is stuck into her hair bun.

Use of vermilion is not universal among married Hindu women of all areas of India. Marriage rituals of Bengali Hindus also differ from those of Hindus of other parts of the subcontinent. Bengalis regard shankha (conch shell bangles) and vermilion as essential wear for married women but Hindus of other parts of India do not. The bangles and the vermilion disappear as soon as a woman becomes a widow. In the ethnic societies, vermilion was regarded as symbol of victory. Putting the pigment on the forehead of a girl abducted by a suitor was but a signal to say 'I have won her and she is mine'. There are anecdotes to suggest that in the ancient times vermilion was put on the forehead of a person to hypnotise him or her and not necessarily for honest purposes. There are instances to suggest that robbers and those out in daring acts of adventure used to put vermilion on their foreheads, ostensibly to seek success and protection from gods. [Enamul Haq]