Snake Charmer (sapudey) group of people who handle the snakes by music and other activities. However, the snakes usually do not respond to any aerial sound. Snake-charming is a full time profession for some and a part-time job for others. It is traditionally a family business and the art of snake charming is passed on from one generation to the other. The secrecy behind it is well-guarded. Most people belonging to the ethnic group of bedey or Bangladeshi gypsy are known as snake charmers. These people lead a life on boat. In some families bedeyni (women bedey) do the job. 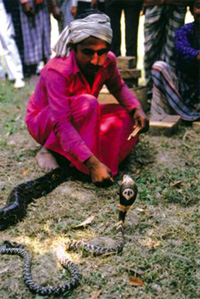 There are others whose only profession is snake charming. They keep a number of snakes in boxes, gunny bags and earthen pots, carry these from one weekly market place to another or get stationed in one town market for months and then move to a new destination where there is always congregation of people. Average snake charmers do not catch the snakes on their own but buy it from the professional snake-catchers. All of them are likely to keep a number of snakes in their possessions. The most favoured species are the cobras and pythons. In addition they keep many non-venomous snakes.

There will be no snake charming without cobra mainly because it can raise its head to an appreciable height and inflate the hood displaying its spectacular pattern. As the charmer plays his flute and keeps chanting ‘mantra’ at the same time moving either his head, elbows or knees the cobra sways its raised hood and body to fix its vision towards the moving object and not to the music.  The cobra is teased to attack the snake charmer. Once the snake fixes its attention to the object it dares attacking it either with open mouth or amidst production of loud hissing noise.

Most snake charmers exhibit those snakes whose poison fangs have been removed so that the charmers can receive bites without the risk of getting venom. Such snakes also fail to eat their usual diet of live food because they can not utilize their poison gland for paralyzing the preys and die within 6 months or so. This is the reason snake charmers must get replacement snakes every couple of months. It may be noted that often the successive teeth behind the uprooted poison fangs of cobras some how get attached with the poison gland. Therefore, these so called 'fang-less' cobras' bites become fatal for the snake charmers themselves. Most snake charmers ultimately die from the bite of such 'fang-less' snakes. A few extremely daring and professional snake charmers will keep poisonous snakes with fangs. Some of them sell amulet (Tabiz) or herbal medicines as protection against snakebite. [Ali Reza Khan]