Soil Profile genetically related exposed horizons of a vertical cut in the soil body. In other words, the vertical sequence of horizons makes up the soil profile. Soil profile formation starts at the soil surface and gradually moves downward. A young soil will usually have a poorly developed shallow profile and an old soil will have a well-developed deep profile. The genetic horizons that develop in a soil profile are called the master horizons. 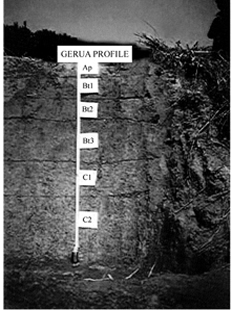 The master horizons of soils are O, A, E, B and C. A young soil usually has a profile with only an A-horizon. It is called an AC profile. Mature soils have both A and B horizons. Therefore, they have an ABC profile. If the B-horizon is only weakly developed, the profile is designated as A(B)C. An E horizon is quite common in soils developed under forests, but rarely occurs in soils developed under grassland. Soils are taxonomically classified mainly on the basis of their profile morphological features.

In Bangladesh, in the case of the various grey terrace and valley soils, the surface layer (considered to be the A horizon because of its position) can be as strongly ferrolysed as the subsoil E horizon and, where it is low in organic matter, can be similar to it in colour. In eroded soils, the surface layer may be formed in material that was formerly a B or C-horizon and may inherit properties of colour, structure, ped coatings, etc from such horizons. In case of deep red-brown, brown mottled and deep grey terrace soils, the red mottled substratum is designated as the C-horizon since appears to have weathered before the formation of the present soils and it continues to depths below the present biological activity. [Md Sultan Hussain]