Sugarcane (akh) a tall tropical perennial plant of the genus Saccharum, a member of the grass family Gramineae. Although there are three species of the genus that are cultivated for commercial production of sugar, S. officinarum is the most widely used species, and has probably been cultivated in Asia from prehistoric times. It has been grown extensively in the Indies and the Americas since the 18th century and is now cultivated in most warm humid areas. S. robustum, one of the wild species, grows in profusion in the New Guinea region. In appearance it resembles closely certain cultivated sugarcanes, but lacks their juiciness.

A slender wild relative, S. spontanenm, is widely distributed throughout the Indian subcontinent, Malaya, the Philippines, and the East Indian archipelago. 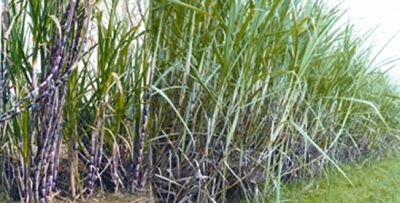 At present, sugarcane is cultivated in about 100 countries. The principal sugarcane growing countries are India, Argentina, Australia, Brazil, Barbados, China, Cuba, Mexico, Egypt, Jamaica, Peru, South Africa, and Hawaii, Florida, and Louisiana of the United States of America. In Bangladesh sugarcane is grown in about 0.38 million acres of land. The annual production of cane is about 5.5 million m tons. It is one of the most important cash crops of the country.

A sugarcane plant has prominently jointed stalks, each bearing two ranks of sword-shaped but gracefully arching leaves. Some varieties may have stalks that are 5-7 meter long. The diameter is very variable in different varieties. Most sugarcane varieties grown in North Bengal have narrow and hard stems that are about 3 cm in diameter. The varieties cultivated in the southern and eastern parts of the country have usually stalks up to 5 cm in diameter and have relatively soft stems. The stem of sugarcane is not hollow and roots emerge from each node.

Sugarcanes grow to the best advantage on a rich, moist soil under sunny skies in a tropical climate. Clay-loam soil with some proportion of sand and silt, mixed with humus is among the best soils for sugarcane cultivation. Uniform high temperatures, strong sunlight, and frequent showers during the growing season are desirable. Irrigation is not necessary if the annual rainfall is 1250-1500 mm. A soil pH between 6 and 7.5 has been found suitable for plant growth. High humidity during the growing period and dry weather at maturation lead to satisfactory production.

In the past Coimbatore varieties of sugarcane were widely cultivated in Bangladesh. The Sugarcane Research and Training Institute, Ishurdi has released nearly 30 sugarcane varieties which cover about 95 percent of the total sugarcane land of sugar mills zones and 25 percent of non-mill zones. The notable varieties are Isd 1/53, Isd 1/54, Isd 16, Isd 17, Isd 18, Isd 19, Isd 20, Isd 25, Isd 28, LJC (Latari-Java-C) etc. Most of these varieties produce 110-120 m tons of sugarcane per ha having sugar content of 12-13%. Among local varieties Mishrimala and Gendari are mostly grown for chewing.

Sugarcane is cultivated by planting the apical soft part of the plant, commonly known as 'sett', in the following season. The left-over basal part of the plants in the field after the harvest is also used as a seed, and this method of growing sugarcane practiced in certain areas is known as 'ratoon' cropping.

Although sugarcane is grown in almost all the districts of the country, the principal growing areas are Chittagong, Comilla, Sylhet, Dhaka, Faridpur, Jamalpur, Kishoreganj, Tangail, Jessore, Kushtia, Bogra, Dinajpur, Pabna, Rajshahi, and Rangpur.

Because it is an annual crop, sugarcane keeps the land occupied throughout the year. Consequently, some farmers are inclined to cultivate other profitable crop rather than sugarcane. This has resulted in a decline in crop acreage as well as the production of the commodity in recent years. Cane is harvested by cutting down the plant stalk. In Bangladesh the harvesting season extends from October to March.

There are 15 sugar mills in Bangladesh. These mills use about 60% of the cane produced; rest are supplied to the molasses producers. The by-products obtained from sugarcane include rum, alcohol, fuel, bagasse, livestock feed, and from the stalk residue, paper and wallboard.

Pests Many insect pests, besides non-insect pests like nematodes, mites, rats, jackals and certain types of birds have been known to damage the sugarcane crop in Bangladesh. About 15 species of insects are considered as major pests. These include the top shoot borer, stem borers, termites, leafhoppers, and the mealy bugs. Among the pests, the top shoot borer, Tryporyza nievella (Lepidoptera, Pyrallidae), is most widely prevalent and at the same time most difficult to control. It occurs in all cane-growing areas of the country.

The adult moth deposits eggs in batches on the under surface of the cane leaf and covers the eggs with reddish-brown anal hairs. After hatching, the young larvae remain in groups for a while, then gradually disperse in the field. At the second larval instar, after selecting a suitable spot on the first open leaf on the top, the larvae penetrates into the mid-rib and bores its way towards the axil. The damage results in the characteristic 'dead heart' symptom due to the death of the apical shoot. Their damage and occurrence are more prevalent when the cane is less than one meter in length. Under favourable environmental conditions, the infestation rate may be as high as 10-12 percent.

The sugarcane stem borer Chilo auricilia is perhaps the most destructive of the pyrallid borers. The pest is more common in the northern part of the sugarcane growing areas. The larva penetrates into the stem by making fine circular hole on the rind. The pest, often known as the stalk borer, primarily damages the internodes. Often, several caterpillars may be seen in a single cane. In such cases the entire cane may be bored through.

The sugarcane pyrilla or the leafhopper Pyrilla perpusilla occurs as a major pest in all cane growing districts. Both the nymphs and adults suck sap from the undersurface of the leaves. The infested leaves gradually become pale and dry up. Under favourable environmental conditions, the population may grow enormously. If left uncontrolled, the sugarcane field may suffer tremendously. The millable quality of the cane as well as the sugar content may fall drastically. Several species of termites, grasshoppers, mites, and mealy bugs injure growing plants, and have been recorded in all sugarcane growing areas of the country.

Diseases Sugarcane suffers from several diseases at all stages of its growth. The common and destructive ones are the red rot, smut, wilt, sett rot or pineapple disease, and chlorosis.

The red rot is caused by the fungus Colletotricum falcatum but is recognised only when the canes are nearing maturity. The disease affects the whole crown, which ultimately withers. The diseased cane develops blotches of red tissues in the internode portions of the stem, and the symptom can easily be seen when the cane is split open longitudinally.

Smut is also a serious disease caused by the fungus, Ustilago scitaminea. Affected plants become stunted in growth and the central shoot forms a long whip-like dusty black structure. Ratoon crops are more susceptible to this disease, and often show a large percentage of shoots transformed into a whip-like structure. In certain areas of the country the wilt disease is a more common phenomenon. It is caused by the fungus, Cephalosporium sacchari. Frequently, the disease begins when the plants are 4-5 months old. The leaves of affected culms gradually turn yellow and dry up. Often, a cottony white mycelium can be seen in the pith region.

Sett rot or pineapple disease is quite common and is caused by Ceratocystis paradoxa. The disease primarily affects sugarcane setts. The growing shoots may die as a result of the infection. If the infected shoot survives it becomes stunted and chlorotic. The disease is so named because a characteristic pineapple smell is associated with the rotting of the affected plant.

The mosaic disease occurs in all sugarcane growing areas of Bangladesh. Affected plants show yellowish stripes that alternate with the normal green portions of the leaf, and the symptom gives a typical mosaic appearance. In severe infections, the chlorotic area may be greater than the healthy portions. The symptoms may extend to leaf sheaths and even to canes.