Tea a popular beverage made from the leaves of evergreen shrub or tree Camellia sinensis, family Theaceae. It is predominantly an agro-based export-oriented evergreen crop in Bangladesh and a perennial crop grown as a monoculture on large contiguous areas. Under natural conditions, a tea plant grows to a small tree but it is configured into a bush by sequential pruning and other silvicultural practices, viz tipping, plucking and by harvesting the optimum vegetative produce. Known in China as early as 2737 BC, tea was first brought to Europe in 1610 and rapidly became a fashionable drink. The plant is indigenous to Assam (India) and probably to parts of China and Japan. 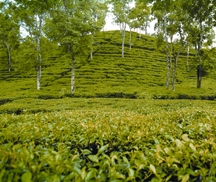 Robert Bruce discovered the tea plant in upper Assam in 1834, which laid the foundation of tea plantation and tea industry in India. Plantations were later established in Sri Lanka; producers today include Africa, South America, Georgia, Azerbaijan, Indonesia, and Iran. Tea plants are often mentioned as belonging to three distinctive types, viz Assam, China, and Camboid. According to a recent classification, there are three taxa of cultivated tea, corresponding to the three geographical regions of South East Asia, namely Assam, China and Indo-China. The first two are distinct varieties, assamica and sinensis, while the third form is known as southern or Camboid form. They are “light leaf” and “dark leaf” Assam varieties. The commercially grown tea plant, as we know it today, is highly heterogeneous. It is not uncommon to find tea plants with varying leaf angles, leaf pose, leaf size, pubescence, and colouration.

Growth and cultivation As tea is almost a self-sterile species and as a consequence an out breeding species, a wide range of variations exist in present day cultivated tea. The seedling population of Bangladesh tea consists of a hybrid and mixed population varying from one extreme to the other. However, the majority of the population belongs to the dark leafed type. 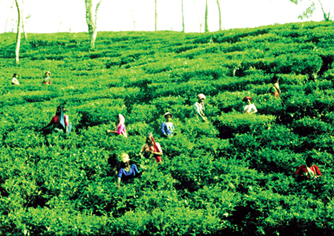 The tea plant requires a warm and humid climate. The ideal ambient temperature being 18.33° to 29.44°C, well-distributed rainfall (>1400 mm per annum) and well drained sandy loam soil with a pH 4.5 to 5.5 are considered ideal for successful plantation. Tea soils are highly weathered, extremely acidic and of low fertility status. In tea soils of Bangladesh, an overall content of nitrogen and organic matter varies respectively from 0.07 to 0.09 percent and 1.0 to 1.2 percent. The critical values have been fixed at 0.1% for nitrogen and at 1% for organic matter. The amount of available phosphorous, magnesium and base saturation is low. The minimum level (critical limit) of nutrient status of tea soil should be 10 mg/g for P, 80 mg/g for K, 25 mg/g for Mg and 90 mg/g for Ca. The C-N ratio should be 10. It is observed that there is a low content of nitrogen and organic matter in the tea soils of northern Sylhet and Chittagong which might be due to leaching and surface run-off during monsoon. On the contrary, the low flat areas of Luskerpore and parts of Balisera and Mono-Doloi circles are subjected to obstructed drainage that reduce the proper utilization of nitrogen there.

The use of shade trees in tea cultivation is a vital and integral component. Generally, tea plants require about 50% diffused sunlight for optimal physiological activity. Therefore, leguminous plants are used mainly to harness soil nutrition and to adopt crop rotation practices in tea. At the same time, the root systems of leguminous plants are ascribed to conserve soil moisture, and receive and store nitrogen from the atmosphere. In Bangladesh Albizia sinensis and A. moluccana provide semi-permanent shades, while A. odoratssima, A. procera, A. lebbek and Derris robusta are used as permanent shades. Solar radiation increases the transpiration rate by increasing the permeability of cell membrane and cell wall to evade water vapour while light appears to induce the opening of the stomata of the leaf. Wind velocity may also affect the transpiration rate. The evaporation loss from soil surface may be affected by the seasonal variation of rainfall, the duration of exposure to solar radiation, and the soil structure and texture which determine the water holding capacity. Sandy soils, however, have less water holding capacity.

Forests also play a useful role in the successful and productive growth of tea in Bangladesh. Bangladesh traditionally has both natural forests and plantation forests. The natural forests are of the tropical semi-evergreen type. Forest plantations are mainly located on higher elevations and quite often tea estates are on high and low hills and valleys. The extensive litter from forest areas when washed away by rains is often deposited/trapped in the tea plantations, substantially adding to the nutrient environment. Moreover, the thick and dense forest (natural and plantation) help to give up huge quantities of water through transpiration, thereby adding to the high humidity level. They also play a major role in the high rainfall spread over greater parts of the year, which is essential for growing tea. Forests are also used to protect tea from high winds, storm or turbulence flowing over hills and up valleys.

Processing The leaves of tea are processed in the tea factories to produce an acceptable product for human consumption. Black tea is the most popular and widely acceptable beverage in Bangladesh. The salient feature of black tea manufacture involves following operations: plucking and handling of tea shoots, withering, processing/rolling, fermentation, drying/firing, sorting and packaging. The making of high quality tea depends very largely on the fineness of the plucked tea leaf ie two leaves and a bud. Withering is the very important first step in black tea processing. It involves removal of moisture from the fresh leaf making it flaccid. The leaf is physically and chemically prepared for the subsequent processing operations. The next step of tea manufacture is the leaf distortion/maceration of the withered leaf, ie rolling. The objective of rolling is to macerate the leaf so that enzymes and their substrate may get intimately mixed up. This is achieved mechanically either by the use of an orthodox roller, the rotorvance or by CTC (crushing, tearing, curling) machines. Fermentation is the process of oxidation of the various chemical constituents of the tea leaf through a series of chemical reactions. Floor fermentation and rack fermentation are very common in Bangladesh tea factories. Firing is physically achieved by blowing hot air through fermented leaves. The temperature of the hot air at the inlet is 87' to 93'C, and 56'C at the outlet. The fired tea is a rather heterogeneous mixture of different sizes of leaf fragments together with stalk and fibres. These are sorted into particles of different sizes using mechanically oscillated sieves fitted with meshes of various sizes in the sorting machine; the tea is then sorted and ready for sale.

Pests and diseases Tea production in Bangladesh is greatly hindered due to a number of pests and diseases. Various insects, mites, nematodes, algae, fungi, and weeds are major yield depressants. So far 29 arthropod pests including 25 insects, 4 mites, and 12 nematodes; and 1 algal and 18 fungal diseases, and 37 predominant weed species have been recorded. However, these pests become epidemic in certain year, season or in some gardens. The pest status as major or minor often depends upon the prevailing climatic and ecological conditions. More than one pest or disease may invade conjointly or simultaneously to the same bush or same garden in a particular season or time. Tea pests and diseases are listed in Tables 1 and 2 respectively.

Table Pests of tea in Bangladesh.

The intensive monoculture of a perennial crop like tea over an intensive area during the last 157 years (1840-1997) has formed a stable tea ecosystem which provided unlimited opportunity for perpetuation and spread of many endemic as well as exotic pests commensurate with gradual expansion of tea plantation in this region. Moreover, a characteristic feature of tea ecosystem is the permanence of shade trees, ancillary crops, forests and the uniformity of cultural practices such as sequential pruning cycle, weekly plucking rounds, etc have a greater impact on the subsequent colonization and distribution of widely divergent pests. Management factors like the uses of fertiliser and agro-chemicals are also believed to have a marked effect on the incidence of pest. The annual crop loss due to various pests, diseases and weeds is estimated to be about 10-15 percent.

Table 2 Diseases of tea in Bangladesh.

Branch canker is most widely prevalent stem disease of Bangladesh tea. It is caused by Macrophoma theicola. Red rust is the only algal disease and caused by Cephaleuros parasiticus. Blister blight is caused by Exobasidium vexans. Only young tea leaves and stems are infested by the organism. In a view of the complexity of tea ecosystem and diversity of pest complex, a multiple approach of pest management is essential. Of all the standard control strategies, viz use of different cultural, mechanical, physical and chemical control as well as breeding of resistant crops are in practice. Among all practices, chemical control is still effective although it has some adverse effects to the ecosystem. [Mainuddin Ahmed and AFM Badrul Alam]