Teknaf Upazila (cox’s Bazar district) area 388.68 sq km, located in between 20°23' and 21°09' north latitudes and in between 92°05' and 92°23' east longitudes. It is bounded by ukhia upazila on the north, the bay of bengal on the south, arakan state of Myanmar on the east, the Bay of Bengal on the west. Teknaf upazila, located on the south east extremity of Bangladesh, is 86 km on the south of Cox's Bazar Town.

Administration Teknaf Thana was formed in 1930 and it was turned into an upazila in 1983. 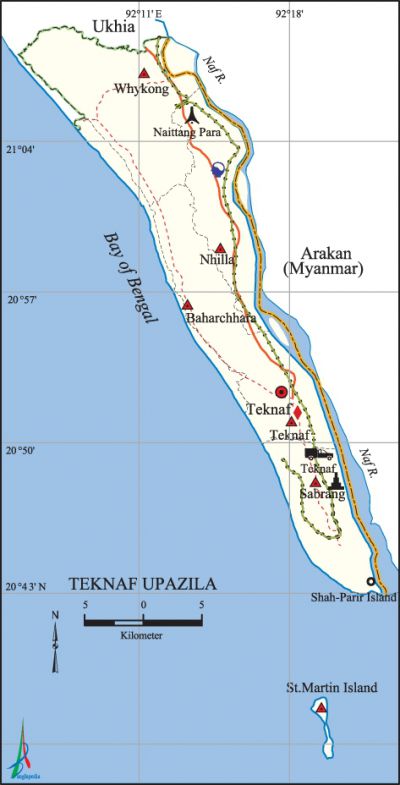 History of the War of Liberation In 1971 the freedom' fighters used to get arms training from Teknaf and the nearby country Myanmar. During the war of liberation the Pak army established a camp at the Teknaf Dakbangalow. They used to abduct innocent people from ramu, Ukhia and Teknaf and tortured them to death at this camp. The Pak army killed about 250 Bangalis in this camp.

Tourist spots St. Matin's Island (It is located 12 km from the main land and is the only coral island of Bangladesh). St. Martin's Island is comprised with four islands such as Zinzira, Dakshin Para, Chhalchhira and Bechhadia. The total area of the island is 4.8 km).

Hats, bazars and fairs Hats and bazars are 13, fairs 1, most noted of which are Sabrang Hat, Shah Parir Dwip Hat, Whykong Bazar and Qila Bazar.

Natural disasters Many people were victims of the cyclones of 29 April 1991 and 30 May 1997. Besides, these natural disasters also caused heavy damages to settlements, livestock and other properties of the upazila.