Temple, Sir Richard (1826-1902) civilian and lieutenant governor of Bengal (1874-1877). Born on 8 March 1826 and educated at Rugby and Haileybury, Temple joined the Bengal Civil Service in 1847. But soon he was transferred to Central Provinces where he held many high posts including Chief Commissionership of the Central Provinces and Residency at Hyderabad court. He was Foreign Secretary to Government of India in 1868 and Finance Member of the Governor General's Council (1868-1874). Governor General Lord northbrook appointed him the Lieutenant Governor of Bengal in April 1874 that he held until January 1877. 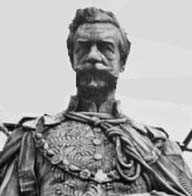 During his short tenure, Temple mostly remained occupied with the management of famine. Besides famine, his administration had to combat the great cyclone of 15-16 October 1874 that devastated the Calcutta City and the port. The famine and cyclone were closely followed by the epidemic fever called kalaazar - a type of malaria. Temple fought these successive calamities extremely competently. His ability in combating the natural calamities inspired the Indian government to depute him to Madras and Bombay in 1877 to manage famines there. He returned to England in March 1880.

Back to England Richard Temple was elected a Member of Parliament from the Conservative Party. He used his Indian experience as an opportunity to study human problems and relations. Among his literary works were: India in 1880; Men and Events of My Time in India, 1882; Oriental Experiences, 1883; Cosmopolitan Essays, 1886; The Story of my Life, 1896; A Bird's Eye-view of Picturesque India, 1898. In recognition of his famine services and intellectual contributions Temple was honoured with CSI (1866), KCSI (1867), a Baronet (1876), GCSI (1878), and DCL of Oxford, LLD of Cambridge and FRS. In January 1896, Temple was sworn in as a member of the Privy Council. He died on 15 March 1902. [Sirajul Islam]