Temple Architecture construction of Mandir or Temple in India started nearly 2000 years ago. The oldest temples those were built of brick and wood no longer exists. Most ancient and medieval stone temples still survive. Structurally, 'mandir' (temple) marked the transition of Hinduism from the Vedic sacrifices to a religion of Bhakti or love and devotion to a community or personal deity. There are substantial differences in temple architecture in different parts of India and South Asia.

Temple is a building or construction for Hindu religious practices and devotion. Mandir is its common name in all over India. Structurally, it has common style with some local variations. Construction Hindu temples have long history. Some dates as far back as the Bronze. In most temples, there are idols or murtis of Hindu deities to whom the temples are normally dedicated. Some temples have symbols instead of Idols. Many temples are characteristically located in key geographical points, such as hilltops, waterfalls, caves, river origins etc.

In West Bengal and Bangladesh, temple architecture has assumed a unique identity. Due to lack of suitable stone in the alluvial Gangetic delta, the temple makers had to resort to other materials instead of stone. This gave rise to using burnt brick and terracotta as a medium for temple construction and decoration. Terracotta exteriors with rich carvings are a unique feature of Bengal temples.

Bengal's masons and artisans built temples and temple sculptures in 9th-11th centuries under the patronage of the Pala and Sena rulers. In the following five centuries of Islamic rule they were employed by Muslim rulers to build brick mosques and tombs, mostly in the city of Gaur. There they created for temples a unique Bengali architectural style that used imported Islamic forms like the dome and arch together with local forms such as the curved cornice, octagonal minarets, and brick ornamentation. When Hindu patronage reappeared in the 17th century, a period of architectural experimentation followed, a process that can be seen in the exceptional group of temples at Bishnupur. The end product was a Hindu temple based on Islamic domes, vaults, and arches alongside Hindu elements like octagonal columns, figural sculptures, and Orissan-style turrets. Temples can look very different from each other, but the differences are mainly in the roofs or superstructures. Otherwise, most temples have many identical elements. The most obvious of this is the arched entrance to the temple. This is usually triple-arched with heavy octagonal columns in between. Single arches are also common. Inside the temple, the chamber is usually covered by a dome (except in Bangla temples where it is a vault) and a vault always covers the porches. The other common feature is the curved cornice and parapet. The curvature is derived from the curved roofs (chalas) of Bengali village huts but is purely decorative in the temples.

The most striking feature of a temple is the elaborate decoration that covers its walls. These are usually called the 'terracotta' temples. In some temples every inch of the temple's surface (even the inside walls) is decorated with terracotta. Mainly this ornamentation is composed of rows of burnt-brick panels, each with a figure or geometric patterns, arranged in particular ways in specific parts of the temple walls, and often forming large sculptural compositions. After decades of experimentation, the organisation of these wall panels became standardised in the 18th century and temples were built with very similar decorative schemes. Kantanagar temple of Dinajpur is the best example of this kind of temple. On the outer wall of this temple large panels above the arches usually have elaborate battle scenes from the Ramayana, panels on the corners, arch frames and columns have rows of images of deities and dancers or musicians. Two friezes running along the base show events from the life of Krishna and social scenes such as royal processions and hunting of the Mughals, and European ships.

Temple architecture occupies one of the fascinating sectors of the architectural heritage of Bangladesh. bengal (Bangladesh and the Indian state of West Bengal) saw a remarkable surge in architectural activities from the 16th to the mid-19th century. Hundreds of brick temples were built in this period in a new architectural style. The motivation behind this burst of creativity and patronage was Gaudiya Vaishnavism, a religious movement started by sri chaitanya (Mahaprabhu) in the first half of 15th century. Many landlords and merchants converted to Vaishnavism and sponsored temple complexes for devotional worship.

Classification of the temples in general temple architecture may be classified into four groups: 1. Rekha deul or xikhara, 2. Pidha deul or Bhadra, 3. Stupa xirsha bhadra and 4. Shukha xirsha bhadra or Rekha. David McCutchion (1972) pioneered the classification of the temples of Bengal. According to David, there are four types of temples in Bengal. Those are:

Traditoinal style this style is divided into two types; Rekha and Pidha deul.

Indo-Islamic style this type of temple has a combination of the Hindu and Muslim architectural features developed in the late medieval period. These are of two types: a. ratna type (temple structure on roof top) and b. domed type.

There are also another type of temples with the porch. These types are influenced by the Orissan temple architecture. In Orissan temples there is a mandapa in front of the garbhagriha. Temple with porch is generally under one roof in Bengal temple architecture. During the 18th and 19th centuries the building of dolmancha and rasamancha was very common in Bengal. Rasamancha is large in size than the dolmancha. It is octagonal in shape. These structures generally stand on the high platform. Towers of the rasmancha are decorated by naba-ratna and pancha-ratna with rekha turrets.

'The Bengali style or the hut shaped temple is not luxurious. Rather, most are modeled on simple thatched-roof earthen huts used as dwellings by commoners. This can be attributed to the popularity of bhakti cults which taught people to view gods as close to themselves. Thus, various styles like Ek-bangla, Jor bangla, do-chala, char- chala, and aat- chala, baro- chala and so on sprang up. The ratna temples consisting of the series of ornamental towers or ratnas. According to the number of ratnas these were named as Pancharatna (five-towered), Navaratna (nine-towered) or Satero ratna (seventeen-towered) in Bengal which is more luxurious than the Chala buildings. A typical example of Navaratna style is the Kantanagar Mandir, Dinajpur. The Sikhara or Rekha type is also known as the Nagara style in Indian aesthetics. 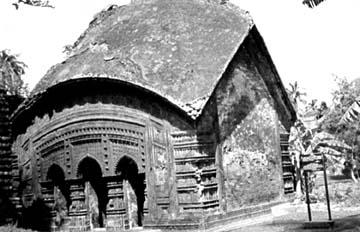 Do-chala temple (twin hut) or Jor Bangla temple consists of two sloping roofs with curved edges or cornices meeting at a curved ridge and also built on a single platform. This style imitates domestic huts in Bengal and was first adopted in Bengali Islamic architecture. This temple style was rare except in the Jessore in Bangladesh. Today the best-preserved collection of Bangla temples are at Baronagar near Murshidabad, where Rani Bhabani built many temples in this style.

Char-chala temple In this type, four triangular roofs meet at a point, again with the ridges and cornices are curved. The temples are generally set on an elongated base with the roof of the chamber extended lengthwise from a central dome by arches and narrow corbelled vaults. The Rajaram Rai temple at Khalia in Madaridpur is a elaboration of the integrated jora-bangla or char-chala temple. The char-chala style is rare in Bengal. However some examples are still precariously surviving in the districts of Faridpur, Pabna, Jessore in Bengal and also in the district of Birbhum, Murshidabad, and Nadia in west Bengal.

At-chala temple style on the other hand became vastly popular with artisans and patrons in the 18th and 19th centuries, especially in the districts of Hugli and Howrah. It is a mare a duplication of the char-chala temple with a further miniature roof structure repeated above to gain height. The larger aat-chala temples usually have a triple entrance. The 18th centuries Rameswari Temple at Naldanga is richly embellished on two sides with terracotta art and has fine entrance. Some good examples of this type are the Gunjanth Siva Temple, Jessore (1740), The Jora siva temple, Bagerhat (18th c), Siva Temple at Chandina in Comilla (19th C) etc.

Ratna style temples are the composite type of architecture. There are a few temples in Bangladesh where the two elements of the Bangla style and the Sikhara style are combined. The lower part of the temple has all the features of the curved cornices and a short pointed spire crowns the roof and this will be adorned with the introduction of ratnas or kiosks. These composite types of architecture with decorative towers or ratnas are common profile throughout Bangladesh. 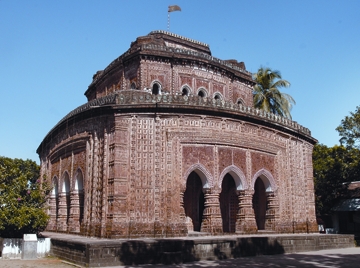 Naba-ratna or nine towered temples, are found allover the country. The kantanagar temple in Dinajpur, Hati-Kumrul temple in Pabna, The Dhamrely temple in Khulna etc are the best examples of the naba-ratna temples. Kantanagar temple in this series is the most significant ornate architecture in Bangladesh. The three storied temple of 99.06 meters high and stand on a stone made square platform measuring 19.20 meters. It was erected by the local raja Prannath in 1704 at the first stage. Later his adopted sun Ramnath completed the remaining works in 1752. The temple had eight ratnas on each four corner of its two roofs and one ratna on the top roof of the temple. The ratnas are no longer on the temple because of the devastating earthquake of 1897. Every inch of the temple surface is beautifully embellished with exquisite terracotta panels from the bottom to the top. The plaques represent mythological (Ramayana and Mahabharata) scenes, flora, fauna, geometric motifs, the social life of medieval aristocratic people (probably the Mughal aristocrats) of Bengal and also few European boats and soldiers.

Pancha-ratna or five towered temples are found in Jessore, Puthia, Dinajpur, and Khulna district. The Gobinda temple at Puthia in Rajshahi was built in the first half of the 19th century. A Pancha Ratna Mandir is built on a square structure rising in two storeys and is crowned by a set of ornamental miniature towers, four on each corner of the first storey and a central one crowning the top of the second. The outer wall of the temple is also profusely embellished with continuous bands of terracotta panels, specially the scenes of Radha-Krishna and the Hindu epics.

There are also some more temples, which could not be grouped in the above classification of temples. Their structural designs are different and a combination of chala and ratna type temples. [Nasrin Akhter]