Tenga Iswaripur Mosque is located in Iswaripur locality of Tenga under Shyamnagar upazila in Satkhira district. The mosque was so seriously damaged that it had become completely unusable. Recently, the mosque has been thoroughly repaired and given a modern look.

Built entirely of brick, the mosque is oblong in plan (41.15m x 10.67m) with 2.13m thick walls. The eastern facade of the mosque is pierced with five arched doorways, while there is only one such doorway in the north and south walls.

Inside, the qibla wall has five semi-circular mihrab apertures in alignment of the eastern doorways. The central doorway and the central mihrab are bigger than their flanking counterparts and are projected outside. The four exterior angles of the building were emphasised with massive octagonal towers, but these have now disappeared. The cornices and parapets of the building are horizontal in the traditional Mughal style.

The mosque is internally divided into five independent square apartments, of which the central one is bigger (6.40m a side) than the side ones (5.70m a side). Axial archways in the north-south alignment interconnect all these apartments with one another, which correspond to the single arched gateway in the middle of the north and south walls.

Over the roof are five domes, one over each apartment; the central one is larger than those over the side apartments. The domes, crowned by lotus with kalasa finials, are carried on half-domed squinches on the upper angles and four blocked arches in the middle of the four walls. The squinches and blocked arches spring from engaged brick pillars - two in each wall. The phase of transition is achieved by means of sultanate Bengali pendentives. 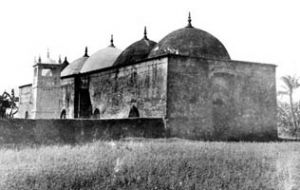 No trace of ornamentation now survives. The whole building is now covered with cement plaster and has been washed white with lime.

The date of the mosque is not exactly known since the inscription tablet is now missing. Two traditions as to its date are current in the locality. According to one tradition, Raja pratapaditya built it for his Muslim supporters, while the other attributes it to akbar's General Raja mansingh. This latter view is untenable, since the Jessore-Khulna region was beyond Mughal control during Akbar's time (1556-1605). The former legend cannot be ruled out. But it is more probable that some Mughal officers who were stationed here after the final defeat of Raja Pratapaditya by Subahdar Islam Khan in 1612 might have erected it.

The mosque deserves special mention because of its ground plan. It is perhaps the earliest example in Muslim architecture of Bengal of a type consisting of five domes in the same line. In plan the mosque seems to be an elaboration or a development of the three-domed type mosques in Bengal or a copy of such five-chambered buildings as the Bara Gumbad Mosque (1494) and the Moth-ki-Masjid (1500) at Delhi and even perhaps the Channi Ghat Mosque at Patna. [MA Bari]