Termite (weepoka) any of the numerous, pale coloured, soft-bodied, largely tropical, social insects of the order Isoptera. Termites are mostly small to medium-sized, cellulose-eating insects consisting of approximately 1,900 species worldwide. They live in highly organised and integrated societies, with individuals differentiated morphologically into distinct forms or castes - the primary reproductives, workers, and soldiers. Each of these castes performs different biological functions in their nest or colony.

Though termites are popularly referred to as 'white ants' on account of their white colour and ant-like habits in living in social colonies, they are not ants, nor are they closely related to ants, which are grouped with bees and wasps in the order Hymenoptera. Social system evolved independently in termites. Some evidence indicate that termites are very primitive insects, which evolved in the late Permian, about 200 million years ago. Definite fossil termites are known from the Cretaceous, about 120 million years ago.

Most termites are small, only few millimeters in length. Some tropical primary reproductives, the king and queen may be more than 70 mm in length. Termites have chewing type of mouthparts. The antennae are moniliform or filiform. Only the primary reproductives have two pairs of membranous wings. The front and hind wings are almost similar in texture, length, and venation. The wings are shed after nuptial flight. They have simple incomplete type of metamorphosis. Nymphs have the potential to develop into any one of the castes. It has been shown that hormones and inhibitory pheromones secreted by the reproductives and soldiers regulate the caste differentiation. 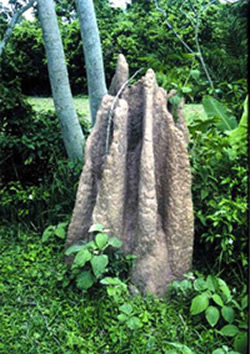 The reproductive functions in the termite colony are carried out by the primary reproductives - the king and the queen. Normally only one pair of these individuals occur in a colony and are developed from fully winged adults. Their body is heavily sclerotized, and they have compound eyes. At certain time of the year large number of primary reproductives are produced. They leave the colony in a swarm, shed their wings along a suture, individual pair mate, and establish new colonies. The worker and soldier castes make up most individuals of a colony; they represent both sexes, are sterile, wingless, and blind. In many species distinct morphological variations exist in the soldiers. The workers are usually most numerous individuals in a colony and perform most of the work including nest building, repairing, foraging, feeding and grooming the immature and other members of the colony. The soldiers have large head and mandibles. They are adapted in various ways for defense.

Termites make nests in various ways. Some live in moist subterranean habitats, others live in dry habitats above ground. Some tropical species construct nests that protrude above the ground surface, known as termitaria. Cellulose is the food of termites, which is digested by the activities of flagellate protozoan living in their gut.

Most termites are destructive, since they feed upon various structures or materials that people use, such as bamboo and wooden poles, furniture, wooden portions of buildings, books, fabrics, crop, forest trees, and a host of other things. Some are beneficial in that they assist in the conversion of dead trees and other plant products to substances that can be utilized by plants.

Termites are usually classified under five or six families. About 100 species are known from this subcontinent and only about 20 of these have been recorded from Bangladesh. Notable among the termites are some pests of field crops and economic plants, such as Microtermes obesi and Odontotermes obosus infesting jute; Odontotermes parvidens, O. lokanardi and Microtermes obesi infesting sugarcane; Termes laprobanses attacking groundnut; and Microtermes species infesting tea. Several species cause considerable damage to sal forest. [SM Humayun Kabir and M Wahed Baksha]