Administration Terokhada Thana was formed in 1918 and it was turned into an upazila in 1983. 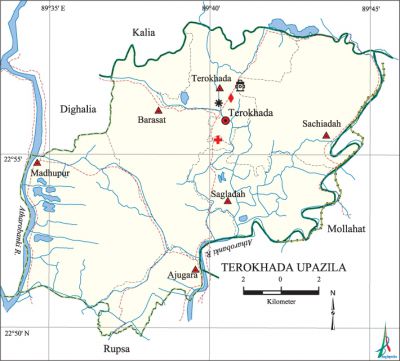 History of the War of Liberation Terokhada was under Sector 9 during the war of liberation in 1971. The Pak army conducted heavy torture and plundering at villages Sahapara and Sachiadah; they also set many houses of these villages on fire. The freedom fighters of this upazila conducted operations in the entire north Khulna region from their Patla camp; it is interesting to note that during the nine-month War of Liberation the Pak army could never takecontrol of the Patla camp which was the main base of the freedom fighters.

Sources of drinking water Tube-well 94.72%, pond 2.92%, tap 0.34% and others 2.02%. The presence of arsenic has been detected in shallow tube-well water of the upazila but it is of tolerable limit.