Tripura Coinage All Tripura coins are in the Bengali script but the language used is Sanskrit. Tripura was a predominantly tribal state (inhabited mainly by the Tripuri tribe) situated in the Eastern border of Bengal. According to traditional chronicles, Rajaratnakar and Rajmala, Tripura's antiquity dates back to epical periods, but there is no supporting evidence justifying this notion. Historically, the earliest mention of dynastic rule goes back to the time of DangarPha (14th century AD), whose death was followed by a struggle for the throne among the princes. Failing to achieve success, one of them named Ratna-Pha went away to gauda to seek refuge. After staying there for some time he was ultimately successful in retrieving his kingdom with the help and support of the sultan of Bengal. RatnaPha then took the title of Manikya and it was he who introduced the coinage system in his territory, thereby initiating the numismatic history of Tripura. 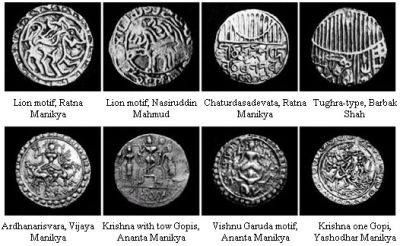 Ratna Manikya (1386 Shaka) was the first to strike coins. His coins bear a close resemblance, in design and weight-standard, to the Bengal Sultanate coinage of that period. Apart from the similarity in decorative aspects, the inscribed linear lion in Ratna Manikya's coin was directly borrowed from the coinage of Sultan nasiruddin mahmud, the ruler who probably gave him shelter. As there is no record of coinage before Ratna Manikya's time, it will be fair to presume that he had brought the minting technology from Bengal. The lion insignia symbolises power; it is also the vehicle of the goddess Durga. The possibility of Ratna's showing gratitude to the sultan through its presence on his coin could not be wholly ruled out. However, the lion remained a permanent symbol in most of the later coins of this dynasty.

Furthermore, it could be stated that Ratna Manikya's Chaturdashdevata coins, depicting fourteen vertical lines with a garland encircling it, gives the visual impression of tughra writing in the Sultani coins. The religious invocations in the epithet of his coins such as Parvati Parameshvara Charana parau, Shri Shri Durga Radha Napta Vijaya Ratnapure, Shri Narayana Charana para and Shri Chaturdasha Deva Charana para etc clearly indicate his liberal-mindedness as far as religious beliefs are concerned. The date inscribed on the coin is 1386 Shaka. This is probably the year of his installation. The place mentioned, Ratnapura, might have been his capital. It is somewhere near present Udaipur.

But the most striking feature of Ratna Manikya's coinage is the name of his Queen, Laksmi Mahadevi, on the coin. This became a permanent practice among all successive kings. In the whole numismatic history of this subcontinent there are only five instances where the Queen's name is inscribed on the coin along with the King. The reason behind this is mostly the predominance of the Queen at that particular phase of time. But in the case of Ratna Manikya there is no evidence of the Queen exerting special power. Neither the numismatists nor the social scientists could explain this unusual phenomenon.

The next coin-striking ruler was Mukut Manikya (1411 Shaka). He had a very short reign. He introduced Garuda on his coins in place of the lion. In his epithets is found religious invocations to Narayana or to Chandi. The name of his Queen was Machatri Mahadevi.

Dhanya Manikya, the ruler who followed, was installed in 1412 Shaka. His Queen's name, also inscribed in the coins, was Kamala. He reinstated the symbol of lion in the coin and deviated from the standard practice of fixed dated coins in the installation year. He introduced commemorative coins recording his victories with respective dates. His coin entitled Vijayendra (victorious-1428 Shaka) and Chattigram Vijayi (victorious over Chittagong-1435 Shaka) were issued after his successive military achievements. However, his victory over Chittagong was short-lived. The port town was soon taken over by husain shah, the Sultan of Bengal. Dhanya Manikya's religious invocations were to Narasingha and Govinda.

The next ruler, Deva Manikya (1448 Shaka), issued consecutive dated coins after his victory over Subarnagram (sonargaon, near Dhaka). He also introduced another variety of coins commemorating his holy bath at Durasa. In his coins names of his two queens (Padmavati and Gunavati) are mentioned.

Vijay Manikya (1454 Shaka), ruled for nearly three decades. Starting from his installation date, he issued coins to commemorate different occasions. In the epithet of one of his coins he describes himself as Kumudisadrshi' (one who looks like the lotus) and on the other as Vishveshvara (one who rules the world). His coins were issued at different dates, some coinciding with his sacred baths at the rivers Dhajaghata, Lakhkha, Padma, and a certain estuary which he described as Pratisindhusimo. These places mentioned are mostly within the adjoining territory of Bengal. It is uncertain whether these were merely religious pilgrimages or were preceded by military invasions. The novel contribution of Vijay Manikya to the coinage system was the introduction of iconic representations. They were portrayals of Ardhanarishvara and 'Vishnu on Garuda'. In his coin the names of three different queens were inscribed - Vijaya, Laksmi and Saraswati. Vijaya's son Ananta (1486 Shaka) ruled only for two years. Like his father, he issued 'Vishnu-Garuda' coins of different designs. He also struck coins representing a cross-legged Krsna playing the flute and flanked by two Gopis.

Udai Manikya (1489 Shaka) occupied the throne after assassinating his son-in-law Ananta and ruled for about six years. Rajamala does not record any details of his rule, but a recently discovered coin surprisingly mentions him as Chattigram Vijayi, ie victor over Chittagong, adding new information to the existing data.

Jaya Manikya (1495 Shaka) succeeded Udai and from his coin it is now known that the name of his queen was Subhadra. He had a short and uneventful reign.

Amar Manikya (1499 Shaka), half-brother of Vijay Manikya, was the next ruler. He led two victorious expeditions and incorporated them in his coins; one of them with the epithet Digvijaya (victorious in all directions) and the other Shri Hatta Vijaya, which was struck after his victory over Sylhet. Later he had a prolonged encounter with the Arakanese, who had occupied Chittagong by this time, and was ultimately defeated by them.

Amar's son RajDhar (1508 Shaka) succeeded his father. He was a pious man and had a long and uneventful reign.

During the installation of the next ruler Yashodhar Manikya there were other claimants to the throne. They are not mentioned in the texts but their presence can be established through coins. Yashodhar's coins are dated 1521 and 1522 Shaka; but there are two coins, one with the date 1521 Shaka, issued by one Virbhadra Manikya, and the other dated 1522 Shaka, struck by Ishvar Manikya. As the dates of these two coins overlap with Yashodhar Manikya's ruling period and as these two names are not mentioned in the Rajamala and Rajaratnakar, they could be pretenders.

However, Yashodhar Manikya managed to survive for nearly two decades. With the help of the powerful Arakani ruler Selim Shah, one Dharma Manikya had probably curved out some parts of his kingdom and issued coins in his name in 1523 Shaka. The most striking feature of the majority of Yashhodhar Manikya's coins are the depiction of Lord Krsna dancing over the Tripura lion. He is flanked by one or two Gopis.

A chaotic situation prevailed in Tripura subsequently till Kalyan Manikya rose to power in 1548 Shaka and brought stability to the state. His coin is inscribed with a Shivalinga. It is worth mentioning here that he had introduced smaller coins like half and quarter issues.

Govinda Manikya (1582 Shaka) followed the same pattern of coinage like his father Kalyan and introduced one-eighth fractions as well. During the early period of his reign Govinda was dethroned by his stepbrother Chhatra Manikya (1583 Shaka). It is only after the latter's death that Govinda regained his kingdom. Rabindranath Tagore has immortalised the same Govinda Manikya in two of his important literary works Rajarsi and Bisarjan.

The next ruler Ram Manikya (1598 Shaka), son of Govinda, had a short reign. He issued coins with queen Satyabati. Ram Manikya was followed by Ratna Manikya II in 1607 Shaka who was deposed in 1615 Shaka by Narendra Manikya. After two years of Narendra's rule Ratna II reestablished his position as the king and ruled up to 1634 Shaka. He is known for the issue of one-sixteenth of a tanka.

Ratna II was followed by Mahendra Manikya (1634 Shaka) and after two years Dharma Manikya became the king and struck coins dated 1636 Shaka. He ruled for about fifteen years and is known for the introduction of one-thirty-second part of the full issue coin.

From this time onwards the kingdom of Tripura gradually became politically unstable; naturally the number of coins issued also decreased. Over the years, they tended to become more like ceremonial issues. The epithets of the later coins became stereotyped; the invocations changed only according to the religious beliefs of the rulers. By the end of the 18th century these hand-struck coins gave place to 'semimachine' issues. By the second half of the 19th century the coins were struck fully by machines in their own mints. This tradition continued till the middle of the twentieth century. The only exception to this practice occurred at the time of Radhakishore Manikya (end of the 19th century), who struck one set of coins with the denomination of double, full and half tankas in some private mint of Great Britain.

Although Tripura coins were issued continuously for about five hundred years, their circulation was mostly confined to the territory of the state or to surrounding regions. Most of the coins are in silver, but a few are in gold. Tripura coins are some of the finest specimens of regional calligraphy, numismatic execution, and iconographic representation in the whole history of the coinage of this subcontinent. [Vasant Chowdhury]