Tsunami is a Japanese word which literary means costal waves. The floodwater caused in consequence of earthquakes, landslide or volcanic eruption in the sea, river or any other water reservoir is called Tsunami.

Tsunami might happen for various reasons which include: earthquake, eruption of a volcano, landslide etc. Two reasons are significantly responsible to the earthquake nearly 20-30Kms below the sea level and sudden undulation of tectonic plates. 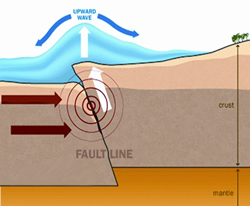 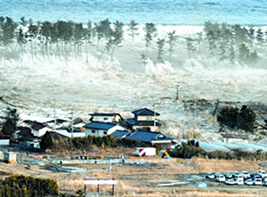 When earthquake knocks at 20-30 kilometers below the sea-level, vibration in the sea ground is resulted and wave in the surface is evident. As soon as a wave is generated in the sea-ground, a huge impact to the surface of water may be felt and consequently Tsunami is come out. Besides, for the impact of carbon-cycle, there may be a movement of tectonic plate in the ground. If any plate frequently hammers other plates, one of its plates may, therefore, climb to other plate; consequently a hump like terrain may be created. Being puffed up the water of sea, river, water reservoir or huge water areas all on a sudden, Tsunami may be generated.

As far as Tsunami concerned, swelled up water, resulted by vibration or pulsation, creates one or more than one huge waves like soliton and then it is propelled at four corners by equal proportion. For a huge sea, the distended wave rushes at the nearest shoreline.

At times, this huge wave becomes weaker at the nearest land shoving a vast water-area. However, a massive-scale-wave strikes to the nearby coastline surpassing all kinds of impediments. Such a sudden distension of wave claims a great deal of wear and tear of lives and properties in the costal region. Although volcanic eruption may happen under the water-area, water may swell up in this way and cause Tsunamis. Furthermore, if any surface land is slipped, it may also craft Tsunami in the water.

Whether Tsunami comes by the shape of a huge wave for all time, is not correct. The water puffed-up in the deep sea is blessed with the depth to be tranquilized. On the other hand, the more the sea is closer to the land and shallow, the more the wave is supposed to get a shape of the peak. Some kind of Tsunami may elevate up-to 30 meters (100 feet). By this time, the highest Tsunami equivalent to 65 meters (212-feet) has been recorded.

In the deep sea, the speed of Tsunami may be maximum 600 miles per hour. The wave of Tsunami is regular in general and the distance between two peaks is 160 Kms (100 miles). Thus, the second wave hits within 1(one) hour to a bit more after hitting the first one and after an hour, the third one, in this way the waves hit the land shore. In 2004, a Tsunami commenced in the Indian Ocean, claimed about two hundred thousand lives in more than 12 (Twelve) countries. However no report of causalities for the Tsunami in Bangladesh was found. After hitting a strong earthquake in Indonesia on September 2007 a warning signal was buzzed, but the signal was, thereafter, lifted. Tohuku, a city of North-Eastern Japan, was struck by an earthquake measured by 9.00 in the Richter-scale at 2:46 PM in 2011 in the local time where the sub-center of it was 130 Kilometers far off Tohuku resulted by Tsunami of 10 (Ten) meters height (33 feet) struck there. '13,333 human lives had been reported to be lost while 4,878,282 were injured and 15,150 were missing. In consequence of excessive generation of hit due to rising of hydrogen from minimum 3 (Three) Nuclear Power Plants, such an explosion was broken out. [Md. Hasinur Rahman]