Tubewell the term generally used to describe water well in the subcontinent including Bangladesh, which are termed as borehole or water well in other parts of the world. It is a device installed into a well to abstract groundwater from an aquifer. A well is first drilled into the ground and then a pipe assembly is lowered which consists of an intake section and a discharge section. The intake section consists of a slotted part, the well screen, and a blind pipe. The discharge section consists of housing pipe, pump and discharge mouth or sprout. 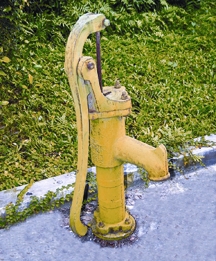 Different types of tubewells are used in Bangladesh for groundwater abstraction. The most popular one is known as Hand Tubewell (HTW) and there are at least five millions of these all over the country. They use number 6 pumps for abstracting water for drinking and domestic use. A second type of hand tubewell is known as Tara pump operated by a piston pump and are also used for drawing water from deep groundwater table areas. These wells have normally 3.81 to 6.35 cm diameters. Shallow Tubewells (STW), mostly used for irrigation, have 5.08-10.16 cm diameter and abstract water with the help of centrifugal pump. Deep Tubewells (DTW) are of large diameter (15.24-20.32 cm) and pump water by a submersible turbine pump. Irrigation DTWs are called deep wells not because of large depth but because of the type of pump used and the capacity of the well. The material used for HTW, TARA and STW are mostly PVC although GI pipes are used in some cases.