Vaisabi a major festival of the ethnic peoples of Chittagong Hill Tracts welcoming the New Year. Different tribes call it in different names, and the name 'Vaisabi' is common to all of them. The Tripuris call the festival Baishu. The Marmas call it Shangrai and the Chakmas Biju. Baishu, Shangrai and Biju are collectively known as Vaisabi. The term Vaisabi is the' combination of the first letter of the three names of the festival such as bai of Baishu, Sa of Sangrai and bi of Biju. The New Year's Day festival is generally observed for three days, last two days of the passing year and the first day of new year in the hilly districts of Bandarban, Rangamati and Khagrachhari. 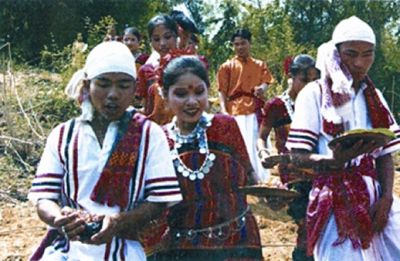 The Baishu festival, the biggest festival of the Tripuris, is observed for continuous three days. Everyday has some rites called Hari Baishu, Bishuma Baishu and Bishikatal or Atadang Baishu. On the first day during Hari Baishu, the Tripuris awake early in the morning and clean their as prescribed by customs. They decorate their houses with flowers. They make their cattle bath and adorn them with flowers. The children distribute flowers among the neighbouring houses. The young men and women exchange flowers with their friends. Khumkaming puja is solemnized in the name of a god by throwing flowers on a river or spring. Some of them also perform worship the flowers and petals. Tripuri women make cakes of binni rice and cholai wine. The males take part in competition of making handicrafts of bamboo and cane and in other games. They also take part in games like dang, gudu, chur, shukui, udeng and wakarai. The jhum cultivators scatter grains in the courtyard of the neighbouring houses for domestic ducks and hens. The Tripuris engage themselves in dancing from the day of Hari Baishu festival. The dance, known as garoya continues from seven days to twenty eight days. The people dance together with the rhythm of drum beat. On the completion of dance programme the Tripuris offer Goroya puja.

On the second day of the festival called Bishuma, the Tripuris welcome the New Year, offer worship and pray to the deity by burning incense and sandal wood and lighting up lamps. They visit their neighbouring houses and eat pachan (a digestive preparation of drink), shimai (a kind of softened food specially made of milk, sugar, cereals and other ingradients) and sweets. They also take various kinds of cakes such as Kalapitha, Chuanpitha, Jalpitha, Unpitha and Mayungpitha. Besides, they eat vegetables and do not kill any animal. On the third day of the Baishu festival known as Bishikatal, there is no bar for taking meat and they offer worship to their deity with flowers. The elder members are given special bath on this day, and they place flowers near their foot as offerings and bow down their head to them as a mark of respect. They keep their doors open to visitors throughout the day.

The Marmas welcome the New Year and bid farewell to the receding year through a festival known as Sangrai. They observe the Bengali New Year on the first day of Baishakh through various functions and ceremonies. The Marmas prepare pachan, cakes and different delicious foods. All of them wear colourful new dresses, visit each other's house and exchange mutual greetings. Men and women of all ages take part in dance and songs together. The Marma elders go to the temple for observing the Ashtashil ritual (eight ceremonial practices). On this day the old Marmas make the image of Gautama Buddha bathed and they also take bath and put on new dresses. The principal attraction of the Marma people is the function of sprinkling water or playing with water, which is called Rilongpoey in Marma language. A pandel is made in advance on the compound of the house for water-play. The Marma young girls keep waiting for receiving the young boys with water sprouting at each other. When the Marma young boys proceed together with the sound of instrumental music and reach the pandel the sprinkling of water by the young boys and girls to each other begins. The Marma young boys and girls consider water as the symbol of sanctity and purify themselves by mutual sprinkling of water, a feature which attracts tourists very much. Both tourists and locals enjoy this game most. This item of Vaisabi particularly attracts the media people.

The New year's Day festival of the Chakmas, Biju, is observed in three phases. The Chakmas observe Fool Biju on 29 Chaitra, Mool Biju on the 30th and Gajyapajya on the first day of Baishakh. On the day of Fool Biju, they collect flowers from the forest and divide these into four groups. They adorn houses with the leaves of margosa tree and the first group of the flowers, dedicate the second portion of the flowers to the worship of Buddha in the temple, offer prayer with the third portion of flowers in the pavilion of worship on the bank of the river, canal and pond, and the fourth portion of the flowers are presented to the dear ones, and dedicated to the elders as a mark of respect. On the day of Mool Biju, pachan or ghanta (a spicy dish of mixed vegetables) is prepared by the Chakmas. Besides, payesh (a sweetened frumenty made of rice, milk and sugar) and various kinds of cakes are prepared and fish and meat are cooked. Arrangements are there for khai (toasted rice) of binni paddy, naru (ball of sweetmeat), shimai and indigenous hilly wine. On this day the Chakmas put on traditional dress, join the cheerful rally and roam about the villages. Children and youngsters are engaged in games and sports. With the nightfall, lamps and candles are lighted up in the houses, compounds and cattle sheds, and everybody seeks welfare of all. The Chakmas go to the temple, light candles to offer worship to Buddha with flowers.

Gajyapajya is observed on the first day of the New Year. On this day the Chakmas relax at home. They get their elders bathed and seek their blessings. In the evening they assemble in the temple for attending religious sermons and ceremonies. [ASM Enayet Karim]