Varendra Research Museum originated from varendra research society. saratkumar ray and two of his close associates akshay kumar maitreya and ramaprasad chanda spent much of their time and energy in establishing the society and then the museum. Their lifelong effort was to unveil the glorious past of Bengal in general, and of varendra in particular by laying bare the monuments that still defied the ravages of man and nature. 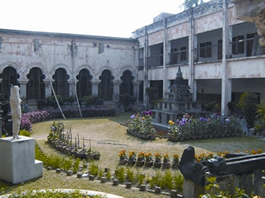 Saratkumar led an exploratory tour accompanied by AK Maitreya, Rakhaldas Bandyopadhyay and a few others to Deopara, Palpara, Malancha, Jugpur, Itahar, Chabbishnagar, Mandoil, Kumarpur, Khetur and Vijaynagar in early April 1910. The party was able to collect 32 pieces of sculptures including the life-size images of Chandi from Mandoil. On their return to the town the leading residents of Rajshahi gave the Kumar and his colleagues a reception and emphasised on the preservation of the collections at Rajshahi. So out of necessity the Rajshahi Museum (later Varendra Research Museum) was born and the Kumar undertook to contribute Rs 200/- per month for the maintenance of the collections.

The existence of the museum was seriously threatened in the year 1911 when the indian museum at Calcutta demanded all rare and unique specimens collected by the Varendra Research Museum. lord carmichael, the then governor of Bengal visited Rajshahi in 1912 and was impressed by the Society's collection of antiquities. Soon after this, the governor of Bengal by a circular (No 11 dated 14 February 1913) guaranteed perfect freedom to the promoters of local museums in matters of collection, preservation and display of ancient sculptures and their antiquities.

The Kumar constructed the museum building at his own cost on the land donated by his elder brother, Raja Pramada Nath Ray of Dighapatia. Lord Carmichael laid its foundation stone on 13 November 1916 and the Kumar made over the building, fully furnished, to the society for housing its museum and library under a Deed of Trust executed on 27 November1919. Lord Ronaldshay, the governor of Bengal, opened it on the same day.

In order to collect sculptures, epigraphs, manuscripts, coins and other objects of antiquarian value the Kumar and his associates organised a number of exploratory tours to numerous sites in various districts of Bengal and discovered, identified and collected quite a good number of relics. Encouraged by the success of their exploration the Society excavated the Pradyumneshvar Tank at Deopara and recovered from its bed as many as 64 pieces of sculpture and three terracotta Manasa-ghatas. In 1911 some members of the society came upon a high mound at Cossipur, 5 miles away from Balurghat in West Dinajpur and laid bare to expose brick built walls, a brick built road approaching to the mound and a number of sculptures. Thus the associates to the Society excavated the sites at mahisantosh in November 1916 and Kumarpur in Rajshahi district and collected a lot of antiquities.

The excavation of paharpur was started by the Society in 1923 in collaboration with the Calcutta University under the direction of DR Bhandarkar. The Kumar promised to the university authorities an annual contribution of Rs 2000/- for five years but the university abandoned the project at the close of the first season. The work was conducted thereafter by the Department of Archaeology and Curator of the Varendra Research Museum was actively associated with it. The museum received as its share from the Archaeological Survey of India 265 items unearthed at Paharpur.

According to a Government Notification dated 6 November 1937 a Committee of Management was set up and the Varendra Research Society surrendered its rights over the present building and the entire collection of antiquities, manuscripts, printed books and furniture to the committee. The list included 760 stone sculptures, 47 metal sculptures, 2 wooden sculptures. 4 clay sculptures, 4 cannons, 211 carved bricks, 42 moulded plaques (terracotta), 29 glazed tiles, 17 stone inscriptions, 23 terracotta inscriptions, 4 documents (paper), 101 ritual utensils (metal), 10 pieces of ornaments, 434 gold coins and 4 garments. The Society also made over to the committee 1832 printed books, 2530 Sanskrit and 1223 Bengali manuscripts.

The Museum Endowment and Publication Fund and the Savita Ray Memorial Fund (established by the Kumar for publication of Sanskrit works) were brought under the control of the Museum. The provincial government restored the original grant, though reduced by 20%, since 1932. The Kumar continued to supplement the government grant with generous donations from time to time for publication and exploratory tours.

The death of AK Maitreya in 1930 and of Kumar Saratkumar Ray in 1945 caused irreparable loss to the museum. The Partition in August 1947 was another severe blow, which jeopardised its existence. The museum was converted into a Medical School in 1949. The School kept under its occupation northern half of the museum premises till 1961.

For about nineteen years since the Partition the museum passed through near moribund stage. It was a very lean period when the museum's income of Rs 1100/- which the museum used to derive as interest of the Trust Fund came to a stop permanently, because the government promissory notes could not be transferred to East Pakistan from Calcutta where they were blocked by the Accountant-General to the Government of West Bengal. The museum depended on occasional non-recurring grants from the central and provincial governments, which enabled the institution to add to the collection of antiquities and to its library. During this period, the museum received from the Central government a sum of Rs 10,000/- (in 1958) for publication of research works through the good offices of the Department of Archaeology. From the same source and through the same channel, the museum again received in 1961 Rs 30,000/- for construction of a library building in order to relieve the acute congestion in the museum. The provincial government supplemented this grant by an interest free loan of Rs 14,000/-. With these amounts the present library building was constructed in 1961 after the medical school had vacated the northern half of the museum premises. To compensate the damages, done to the Curator's quarters and other properties, the school made over to the museum their 'Anatomy Museum' building which they had erected within the walled compound of the museum.

The museum strove hard since the Partition to maintain its activities. But a growing institution like the museum cannot continue indefinitely on occasional government grants. The Government of Pakistan refused to approve the scheme submitted in 1961 for development of the museum unless the institution was handed over to the provincial government. The Management Committee, however, ignored the central government's directive because they regarded the transfer of the institution to the government as a betrayal of the objectives of the museum.

The Rajshahi University authorities and the Rajshahi District Administration succeeded in impressing upon the provincial government to hand over the museum to the university. The deed of transfer was duly signed and the formal transfer took place on 10 October 1964. The university assumed full financial responsibility of the museum.

Gallery-1 offers relics of the Indus Valley-Civilisation (2500 BC), finds from the excavations at Paharpur in Bangladesh (8th-12th century AD), Persian farmans and Bangla documents, Sanskrit inscriptions in old Bangla scripts, glazed tiles, metal ware in Islamic style, hand written copies of the Holy Quran, Bangla and Sanskrit manuscripts, Mughal paintings and miscellaneous sculptures in stone and bronze, antiquities from Nalanda, Bihar and other parts of India.

In Gallery-2, there are Buddhist and Hindu stone sculptures and modern wood sculptures. Gallery-3 displays Hindu sculptures: images of Surya, Shiva, Ganesha and Visnu, including his incarnatory forms. In Gallery-4 are cult icons of the Shaktas of Durga-Gauri-Uma-Parvati, the Matrikas and Chamunda. Gallery-5 offers images of Buddha, Bodhisattavas, Taras, Jaina Tirthankaras and minor gods and goddesses of Hinduism. In Gallery-6 there are Arabic. Persian, Sanskrit and old Bangla stone inscriptions, sculptured stones of the Muslim period, miharab, decorated doorjambs and lintels and a pair of Sher Shah's Bronze cannons.

The upper row of the verandah is furnished with terracotta moulded plaques from Paharpur. In the bottom row are Buddhist and Hindu sculptures. The courtyard offers a fascinating view of sculptured stones from Hindu and Muslim buildings, stone pillars, Shiva Lingams and Yonipattas.

The museum library built up a collection of books and periodicals, right from the beginning, essential for research and higher studies in ancient and medieval history and art and archaeology of Bengal. The number of Sanskrit manuscripts traced so far is 2,530. An idea of their subject matter can be formed from the descriptive catalogue of 840 manuscripts prepared and already published (1979), 89 Puranas, 106 Smrti, 98 Grammar, 24 Lexicons, 71 Poetry, 10 Drama, 5 Rhetoric, 62 Vasisnava literature, 75 Vedanta (Nyaya), 37 Ayurveda. 37 Astrology, 2 History, 3 Buddhist literatures, 12 Miscellaneous. The museum can, at present with 10,147 volumes, reasonably feel proud of its library. [Saifuddin Chowdhury]