Varthema, Ludvico Di a European traveller who came to Bengal via Cairo, Beirut, Damascus, Makka, Hormuz, and different parts of the Deccan. He has left behind an account that contains the description about the customs and manners of the people, products of the countries as well as the details of the Portuguese attempts to get a foothold in India.

An inhabitant of Bologna, he began his travel in 1502 through overland route to India. Leaving Europe at the end of 1502, Varthema travelled to Makka via Cairo, Beirut and Damascus. At Makka he was imprisoned as a Christian spy. With a flair for languages and posing as a Muslim, Varthema escaped to northwest coast of Africa, from where he took a ship to Diu. On the way, he stopped at Hormuz, took a ship for Cambay and reached there on 10 October 1504. He found large production of cotton as well as mixed cotton and silk stuff, which were exported to various countries. The inhabitants would not kill any living being and were neither Hindus nor Muslims. 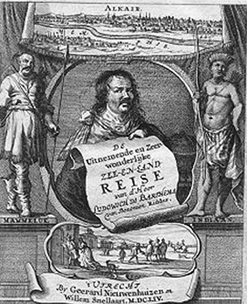 The description of the city of Vijayanagar by Varthema, where he reached on 6 December, is interesting. It was seven miles in circumference and had triple circle of walls. The 'Pagan' king was powerful and constantly kept 40,000 horsemen. Horses were sold at Vijayanagar even for 800 Pardai (a gold coin). Varthema thought, 'the city is situated like Milan'. The revenue of the king was 12,000 Pardai per day.

Varthema then moved on to Dharmpatnam, a port mainly utilised by the Muslim merchants. On 1 January 1505, Varthema reached Calicut, whose description was the longest in his account. The sea 'beats the walls of the houses' while the port was a mile distant towards the south. A small river runs through Calicut. There was no wall and the houses extended about a mile. The entire area would not be over six miles. The houses of the poor people were of thatched cottages. Varthema then described the religious works of the Brahmins as well as the shipbuilding at Calicut, one of the rare accounts of indigenous efforts during the time of the arrival of the Portuguese.

Varthema was not impressed with the palace of the king that was half a mile in circumference. The floors were of cowdung. The king was called Zamorin, who was one of the richest in India. The principal products were pepper and ginger. There were different fruits including jackfruit, mangoes, coconut and bananas. Good oil and wine were produced. The women were allowed to take several husbands and among the merchants, there was the custom of swapping of wives. Most of the merchants were Hindus.

Moving by the river through the beautiful backwater of Calicut, Varthema reached the city of Kalyankullam inhabited by Nestorian Christians. From there he went to Negapatnam and to Ceylon, via Tenasserim (now Mergui), whose Hindu king was then at war with Vijayanagar and Bengal. A number of Muslim merchants were living in a separate street.

From Mergui, Varthema reached the city of Bengala, generally identified with Saptagram after eleven days journey on 13 March 1505. The sultan (obviously husain shah) kept Muslim foot soldiers. He was then at war with Vijayanagar. There were very rich merchants, who lade fifty ships annually with cotton and silk stuff. These goods, some of which were muslins, were exported to Turkey, Syria, Persia, Arabia, Ethiopia and all over India. Jewels were imported and Varthema found some of these Nestorian Christians dealing with jewels. They did not wear shoes. Varthema believed that Saptagram was the best place in the world to live in. From there he took a ship for Pegu.

Reaching Pegu on 1 April 1505, Varthema travelled through Malacca, Sumatra, Banda, Moluccas Island, Java and then came back to Calicut to describe the naval battle between Calicut and the Portuguese on 16 March 1506. He left Cochin on 6th December 1507 and returned to Rome in December 1508 via Mozambique and Lisbon.

His first book appeared in Italian at Rome in 1510 and soon ran into several reprints. The Latin edition appeared in 1511 and a German edition came up in 1515. It was first printed in Spanish in 1520, in French in 1556 and in Dutch in 1563. Richard Eden translated it into English in 1577. In 1863, John Winter Jones translated it into English from the Italian edition of 1510. Several reprints in different languages had appeared by that time. The authenticity of the account of Varthema was first doubted by Garcia de Orta in 1550, a view that was shared by Henry Yule and other scholars. However, the account of Varthema, by and large, was found to be plausible, although Varthema was prone to narrate tales of his adventure more too often.

The importance of the account of Varthema lies in his description of the customs and manners of the people, products of the countries as well as the details of the Portuguese attempts to get a foothold in India. Varthema had become a Portuguese factor in Cochin and was knighted by the Portuguese Viceroy Francisco d' Almeida. His account also leaves no doubt regarding the existence of a sizeable number of Nestorian Christians and the vigorous commercial activities of the Muslim merchants. His description of the ships and boats remains the best of the period. [Aniruddha Ray]