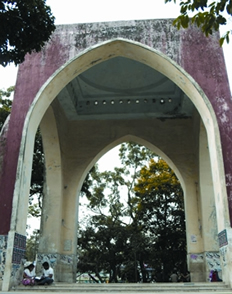 Memorial to Victims of Sepoy Revolt 1857

Victoria Park named after Queen Victoria (1819-1901), was laid out in the first half of 19th century at the initiative of khwaja abdul ghani in the sadarghat area of dhaka on the ruins of an old building, called Antaghar, a clubhouse of the Armenians then living in a large number in the neighbourhood. The place got a special identity because, during the sepoy revolt of 1857, some mutineers including a woman were hanged at this spot. In 1858, the commissioner of Dhaka Division read out Queen Victoria's famous proclamation here before a large assembly of people about the clemency for the sepoy uprising. Much later, the Dhaka Improvement Trust (now rajuk) erected a huge cenotaph here to perpetuate the memory of the patriots who sacrificed their lives in the cause of freedom. There is an obelisk inside the park.

The park was oval in shape, and was enclosed with iron railing. In the past, four British canons, embedded in earth marked the boundary of the former clubhouse, but these canons were later taken out and installed inside the park. In Taylor's time, the neighbourhood had a different appearance. At the junction of busy old town streets there was a small open small space in the form of a square and with a circular garden in its centre.

In the vicinity of this square, and along the bank of the river to the distance of half a mile, were situated the English Factory, St Thomas' Church, Government Collegiate School, mitford hospital, and many houses of the European residents. The park was renamed Bahadur Shah Park in memory of the last Mughal emperor during whose time the mutiny took place. In the 1960s, Dhaka City Corporation renovated the park and converted it to a memorial in honour of the martyrs in the struggle for freedom. [S M Mahfuzur Rahman]