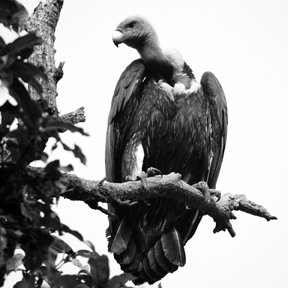 Vulture (shakun) a group of large, keen-sighted, strong-flying bird of prey that feeds on carrion. New World vultures, included in seven large scavenging species, are related to storks and cormorants. They have broad wings, fan-like at the tips, on which they soar while looking for carrion. They have no feathers on the head or neck, thought to reduce fouling of feathers when feeding and perhaps to help with heat regulation. The Old World vultures, include 11 species, are related to eagles, and are found in Africa, Europe, and Asia. They all belong to family Accipidridae. They look similar to the New World species, such as condor (family Cathartidae) but usually have feathered necks. Of the 18 vulture species distribtuted in the New and the Old World, six occur in Bangladesh, of which four are resident and two are migratory (Table). Among the resident vultures, all are critically endangered.

Vultures are scavengers that rarely kill prey; locate food by sight rather than scent. They spread themselves in the sky and keep an eye on their neighbours; when one circling bird descends to a corpse, others see and quickly follow. They are incapable of sustained flapping flight and depend on rising air currents to keep them soaring aloft; graceful in flight, glide and circle for extended periods, and can travel vast distances. Vultures gorged with food, are often unable to take flight.

As carrion feeders, vultures are threatened in most parts of the world by the general decline in number of wandering herds of wild and domestic herbivores and by sanitary practices involving the removal, burying, or burning of dead animals. The Palmnut Vulture (Gypohierax angolensis) of Africa is dependent on the fruit of the oil palm. Most vultures lay 1-3 white or pale eggs.

NB: Previous names are given in squre brackets

Red-headed vulture (raj shakun) a critically endangered bird, Sarcogyps calvus, of the family Accipitridae, order Ciconiiformes (previously under Falconiformes). Also known as King Vulture, the bird has black plumage and naked yellowish red head, neck, thigh and legs. There are white patches at the base of neck and on upper thighs. A thin whitish band along the underside of wings is conspicuous at flight. Wings are pointed; body length about 84 cm. They are less gregarious than other vultures; 1 or 2 seen while scavenging a carcass with White-backed Vultures. Called as 'King' Vulture because its fellow White-backed Vultures allow it to start feeding on carcass at first. Feeds almost exclusively on carrion. Its call is a hoarse croak. Breeding season is December-April. Nest is a large platform of sticks and twigs lined with straw and leaves. Commonly built at the top of a Ficus or mango tree at 9-12 m height. Only one white egg is laid. They are now found in Lalmai Hill area of Comilla district. Habitat loss is the main threat. The bird is also found in Pakistan, India, Nepal, Myanmar, Thailand, Malaysia, and Vietnam (southern part). [Md Anwarul Islam]