Wagtail (khanjon) long-tailed, sparrow-sized, songbirds related to the pipits, bearing outer white feathers, frequenting streams and stagnant water and feeding on seeds, insects, worms, small molluscs, and crustaceans. These birds walk and run rapidly, catching insects on or near the ground. The wagtails are named for their habit of bobbing their tails, and are usually found near riverbanks and in moist grassland. Males are brighter than the females. An atypical species, the forest wagtial, Dendronanthus indicus, is restricted to forest on its breeding grounds. The nests are made of moss, grass and roots, with a lining of hair and feathers; four to six eggs are laid, bluish-white or brown, with yellow marks. There are 12 or so wagtail species distributed worldwide. Bangladesh has 6 species; one is resident and 5 are migratory. 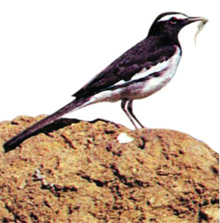 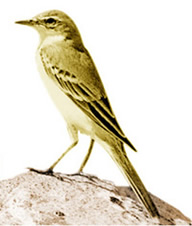 Pakra Khanjon (White-browed Wagtail, Motacilla maderaspatensis): a large wagtail of black-and-white plumage, resembling in pattern that of the Magpie Robin, but with a prominent white eyebrow. In the female the black portions are duller and browner. Pairs are found at streams, tanks, etc;

White Wagtail (Motacilla alba): In winter plumage the black bib is much reduced or wanting, the chin and throat being white like the underparts. Sexes alike. Scattered parties or flocks running about and feeding on open grassland;

Halud Khanjon (Yellow Wagtail, Motacilla flava): slim and long-tailed chiefly yellowish- or olive green above, yellow below. This bird is seen running about in marshy fields and pastureland, constantly wagging its tail up and down.The three commonest races wintering in this region are the Blackheaded (melanogrisea), Blueheaded (beema), and the Greyheaded (thunbergi). These birds can be easily identified in adult summer plumage, but difficult to tell apart in juvenile and winter dress. [Sharif Khan]