Walipur Alamgiri Mosque situated in Walipur village under Hajiganj upazila of Chandpur district. There are two mosques in the same locality - one known as Shahi or Alamgiri Mosque and the other as shah shuja mosque. The Alamgiri mosque has suffered much due to subsequent restoration works. Nevertheless, enough still survives to give an idea of its original plan and design. A Persian inscription in fine nastaliq character, fixed over the central doorway, records the construction of the mosque by one Abdullah in 1692 AD in the reign of Alamgir aurangzeb. 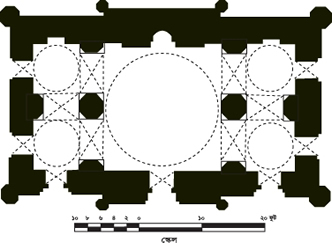 In the middle of the eastern facade of the oblong mosque (15.24m by 8.23m) there is a projected fronton bordered with octagonal turrets through which opens out the main doorway. This has a higher arch with a half-dome within a rectangular frame.

There are two more doorways in the eastern facade, one on either side of the central opening, having an outer arch with a half-dome below. Each of the north and south walls is pierced with a pair of arched doorways. The mosque has therefore seven archways in total -three in the east and two on each of the north and south walls. The four exterior angles of the building are strengthened by octagonal towers, which are carried beyond the horizontal parapets and topped over with kalasa finials, but have now been renovated. 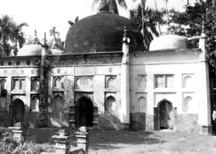 Two massive octagonal brick pillars divide the interior of the mosque into five square bays - a large one in the middle (5.87m a side) and two smaller ones on its either side which are arranged in the east-west axis. Archways interconnect the bays; the arches are placed directly on two free standing octagonal pillars and engaged semi-octagonal pillars.

It is worth noting that these arches are continued upwards as walls to make the bays above. This special device has given the mosque a two-storied appearance internally. All the five bays are roofed over with domes crowned with lotus and kalasa finials on cylindrical drums. The domes are carried on half-domed squinches on the upper corners and the blocked arches in between the squinches in the middle of the walls.

Octagonal turrets rising high above the horizontal parapets border the outside projection of the central mihrab, like that of the central archway. Inside, there are three mihrabs in the qibla wall. The central mihrab is semi-octagonal in design, but the flanking mihrabs are of the shallow rectangular type.

The original plastering of the building has been replaced by modern cement plaster. The horizontal parapet is now plain. The facade of the central archway projection is marked with shallow rectangular panels, each being further enriched with such motifs as plants and small trees with flowers in stucco. The central mihrab arch springs from beautifully decorated pilasters and has foliaged designs at its spandrels. The rectangular frame of the central mihrab, though now barely plain, is topped over with a frieze of blind merlons. A fine specimen of Mughal stucco ornamentation is still preserved in the squinches and blocked arches in between, which support the domes above. The extrados of the squinch arches and blocked arches are ornamented with interlocking scrolls, while the tympanums of the blocked arches are minutely embellished with floral scrolls with intertwining rosettes in the centres. Above them all round the interior base of the cylindrical drum runs a slightly sunken frieze decorated with floral scrolls.

Five-domed type mosque, one of the important varieties of Bengal mosques, shows two sub-types: (a) a mosque with a large central dome and a pair of small domes on each side in the same line and (b) a mosque with a large central dome and four small domes on the corners. The present mosque is the culminating example of the second variety. Both in planning and in the execution of elevation details of the building, the architect and the artisans have left behind a clear mark of their skills and perfection of ideas. The division of the interior of the mosque into five squares has been very scientifically effected by the disposition of two octagonal short massive freestanding pillars instead of the two east-west wide arches of the previous examples of the series. Mosques on this model were not built in Bengal for a long time, but almost two centuries later the type reappeared in the Becharam Dewri Mosque (1872) in the city of Dhaka. In plan Becharam Dewri Mosque is an exact copy of the Alamgiri Mosque but inferior in quality and elevation details.

Such mosque design in Bengal started with austagram mosque and evolved through the sarail mosque and the Walipur Alamgiri Mosque. The design is really unique. Question may now arise as to the origin of this particular kind of Bengal mosques. In Turkey under the early Ottomans the mosque of Rustam Celebi (c first half of the 15th century) at Tokat provides perhaps the earliest known example of its kind with five domes - the large central one and a small one on four corners. Similar plan is also found in such other Ottoman mosques as the Guzelce Hasan Bey Mosque (1406) in Hayrabolu and the Uc Serefeli Cam (1437-47) at Edirne. These mosques are generally regarded as the precursors of the great Ottoman mosques at Istambul - Bayezid mosque (1501-06), Sulaymaniya Mosque (1550-59), and the beautiful Selimya Mosque (1569-75) at Edirne. The five-roomed or five-domed planning of the Ottoman mosques may perhaps be said to have been dictated by those of some early Muslim buildings of Syria.

In India the Jamat Khana Mosque (1310-16) at Delhi is a lone example of its kind. This mosque design continued to have been practiced in Northern India in an elaborated form in Humayun's Mosque (1530) at Agra, where four small domed-rooms, instead of two, are attached on either side of the large central domed chamber. It may, therefore, be said that the plan of the second variety of the five-domed type mosques in Bengal was not innovated by Bengal architects, and its idea is very likely to have been borrowed from the sources stated above, particularly perhaps from those of Turkey or Upper India. [MA Bari]