Wasp (bolta) any of several families of insects of the order Hymenoptera. There are more than 17,000 species of true wasps, characterized by a narrow abdomen called waist and by the presence of a sting in the female. Wasps are most common in tropical or warm climates. Only a few species live in the cold region. Most wasps have slender bodies and four wings, and are metallic blue, black, yellow, or reddish. Bangladesh has representative species of all the families of wasps. Some are quite of abundant. 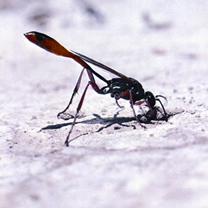 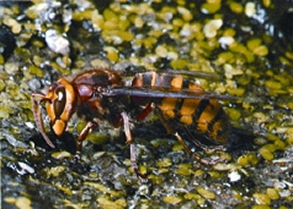 Wasps are among the most intelligent insects on earth. They are related to the bees and ants. Some live in colonies and cooperate with one another; these include the hornets and yellow jackets (Vespidae). The colony is made up of three types of wasps: queens, males and workers. Other kinds do not live in communities, but build separate nests; these are solitary wasps such as masons, carpenters, and diggers.

All the social wasps have the habit of folding their wings lengthwise when they are at rest. Solitary wasps hold their wings flat or at an angle. Social wasps build their nests with wasp paper which is a mixture of old wood and plant fibres. Wasps chew this material to a pulp, using saliva and then form it into masses like felt. It then becomes just like paper. Among the solitary wasps masons are also known as the potters and stoneworkers. Potters build their nests with mud that looks like urns, and stoneworkers mix pebbles with the mortar. Carpenter wasps tunnel into the wood of trees or old posts. The diggers dig tunnels running down into the ground. Wasps sometimes damage fruit, but they also control large numbers of caterpillars and other harmful insects. The adults eat nectar and fruit juices, but the young feed on spiders or insects. [Badrul Amin Bhuiya]