Weaver Bird (babuipakhi) sparrowlike birds of the family Passeridae, order Passeriformes. The bird is known from its elaborately interwoven nests and locally familiar as babui or baoi. The males are often conspicuously coloured. Most species of this group of birds live in Africa, a few in Asia and Australia. Weavers are so called because their nests are made from leaf fibres woven together like a basket. The hanging nests have complex entrance tunnels. There are about 117 species of weavers worldwide; Bangladesh has three species. 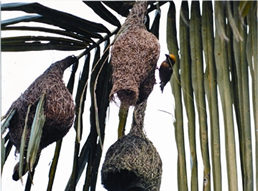 Weaver birds and their nests

A prominent supercilium, a spot behing ear, and narrow moustachial streaks, pale yellow. Found in flocks. Streaked Weaver (Ploceus manyar): breast fulvous, boldly streaked with black in both sexes and at all seasons. Crown of head in breeding males yellow; in females and non-breeding males brown. Flocks are found in swampy tall reed-beds.