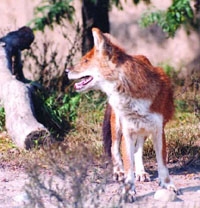 Wild Dog (buno kukur) a member of the Canid family (order Carnivora) closely related to the jackal, fox and wolf. It looks like a domestic dog and hence locally known as dhole, ramkutta, bonkutta and lalkukur. It however, differs from others in having six molar teeth in the lower jaw, whereas the others have seven. The body colour of the wild dog, Cuon alpinus, is brick-red.

It is a social animal, lives in packs. The pack is a family, or a union of two or more, sometimes of several, families. Such union helps them in killing larger prey. Depending on the size there may be more than one leader in each pack. They usually hunt during daytime, but when hungry may hunt in moonlit nights. They may hunt animals which are much larger than their body size, eg buffalo. Of all the carnivores wild dogs are the most cooperative, organised and skilled hunters.

They keep chasing the prey and bite its different parts until the prey is tired. Breeding season is mainly from September to December, when they give birth to 4-6 cubs. Gestation period is 60-70 days. In Bangladesh wild dogs are found in the hilly areas of Chittagong and the Chittagong Hill Tracts. It is now a critically endangered species in the country. [Sharif Khan]