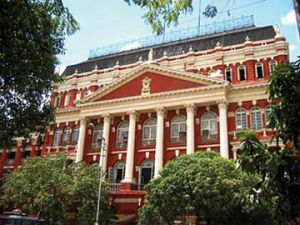 Writers' Building the secretariat building of the State Government of West Bengal, India, and the seat of the Chief Minister of West Bengal, has obtained historical significance through its long continuation under the same name ever since the erection of the East India Company's' Fort William' in Calcutta (now Kolkata) in 1702. In 1776, when the British rule in Bengal was virtually established and company's clerks then called 'writers' increased manifold, a new structure was established by governor warren hastings to accommodate the writers. From that time the complex was called Writers Building. But the Writers' Building continued to serve the residential purpose of the company's clerks until 1800, when Fort William College was established in part of the building, and clerks were shifted to other places for accommodation. The Writers' Building then became the secretariat of the British colonial state. The Building was expanding fast in view of the increasing need of the colonial empire. The most remarkable expansions and alterations took place in years 1821, 1830, 1871-74, 1877-82, and 1879. Every time new blocks were added to the main complex, known to all as Writers' Building.

The Writers' Building complex is a classical European architecture which began its journey from being the residential shanties of the company's clerical staff and ended up being the epitome British imperial power in the east. To the general people of Bengal, the Writers' Building turned out to be the symbol of bureaucratic power and red-tapism and also of corruption. This building frequently figured in literary treatment all over British India and beyond, whenever British colonial state power, bureaucratic grandeur, lobbying and corruption were characterized. [Nasrin Akhtar]