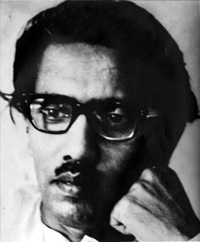 Zafar, Sikander Abu (1919-1975) litterateur and journalist, was born at Tentulia in Satkhira (greater Khulna) on 19 March 1919 where his grandfather Syed Alam Shah Hashemi had settled after coming from Peshwar in Pakistan. His full name is Syed Al Hashemi Abu Zafar Muhammad Bakht Sikander.

He passed Entrance examination (1936) from the neighbouring Tala B Dey Institute and passed Intermediate from Ripon College, Kolkata. He started his career in the military accounts section (1939) in Kolkata. He also worked with the Globe News Agency of Satyendranath Majumdar for some time.

Abu Zafar came to Dhaka from Kolkata in 1950 and began to work as a journalist for the Daily nabajug, the ittefaq, the sangbad and the Millat. He founded and edited (1959-1970) a monthly magazine called samakal. He also set up a printing press called Samakal Mudrayan and a publishing house named Samakal Prakashani in 1958.

Abu Zafar was one of the activists of the cultural movement that launched the concept of Bengali nationalism in East Bengal in the 1960’s. During the war of liberation in 1971, he composed a number of lyrics of patriotic and revolutionary nature to encourage the people of his country. His song ‘Amader sangram chalbei’ (Our struggle must continue) inspired people during the liberation war.

His translated works include Yadur Kalas (Magical pitcher, 1959), Saint Luier Setu (The Saint Louis bridge, 1961), Rubayyat: Omar Khayyam (Quatrains of Omar Khayyam, 1966), etc. He was awarded the Bangla Academy Award (1966) for his plays and the Ekushey Padak (1984, posthumous). He died in Dhaka on 5 August 1975. He lies buried at Banani graveyard. [Golam Kibria Pinu]