Abedin, Zainul (1914-1976) an artist of exceptional talent and international repute. He played a pioneering role in the modern art movement in Bangladesh that began, by all accounts, with the setting up of the Government Institute of Arts and Crafts (now Institute of Fine Arts) in 1948 in Dhaka of which he was the founding principal. 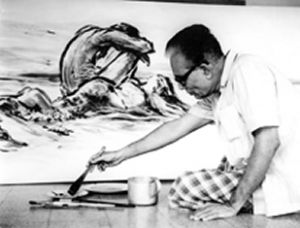 He was well known for his leadership qualities in organising artists and art activities in a place that had practically no recent history of institutional or professional art. It was through the efforts of Zainul Abedin and a few of his colleagues that a tradition of Modern Art took shape in Bangladesh just within a decade. For his artistic and visionary qualities the title of Shilpacharya has been bestowed on him.

Born in Mymensingh in 1914, Zainul grew up amidst a placid surrounding dominated by the river Brahmaputra. The river and the open nature inspired him from his early life. He got himself admitted in Calcutta Government Art School in 1933 and learnt for five years the British/European academic style that the school diligently followed. In 1938, he joined the faculty of the Art School, and continued to paint in his laid-back, romantic style. 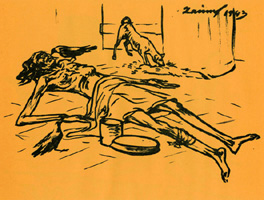 A series of water colours that Zainul did as his tribute to the river Brahmaputra earned him the Governor’s Gold Medal in an all-India exhibition in 1938. It was a recognition that brought him into the limelight, and gave him the confidence to forge a style of his own.

Zainul's dissatisfaction with the Orientalist style that seemed to him heavily mannered and static, and the limitations of European academic style led him towards realism. His fascination with line remained however, and he made versatile use of it in his interpretation of the everyday life of the people.

In 1943, he drew a series of sketches on the man-made famine that had spread throughout Bengal, killing hundreds of thousands of people. Done in Chinese ink and brush on cheap packing paper, the series, known, as Famine Sketches were haunting images of cruelty and depravity of the merchants of death, and the utter helplessness of the victims.

The sketches brought Zainul all-India fame, but more than that they helped him find his rhythm in a realistic mode that fore grounded human suffering, struggle and protest. The Rebel Crow (water colour, 1951) marks a high point of that style. This particular brand of realism that combined social inquiry and protest with higher aesthetics was to prove useful to him in different moments of history such as 1969 and 1971 when Zainul executed a few of his masterpieces.

In 1947, after the partition of the subcontinent, Zainul came to settle in Dhaka, the capital of the eastern province of Pakistan. Dhaka had no art institute or any artistic activity worth mentioning. Zainul Abedin, with the help of his colleagues, many of whom had also migrated to Dhaka from Calcutta, founded the art Institute. In 1951, he went to Slade School of Art in London for a two-year training. Zainul's works after his return from London showed the beginning of a new style a 'Bengali' style, so to say where folk forms with their geometric, sometimes semi-abstract representations, the use of primary colours and a lack of perspective were prominent features. Two Women (gouache 1953), Painna's Mother (gouache 1953) and Woman (water colour 1953) are some of the notable works of this period. 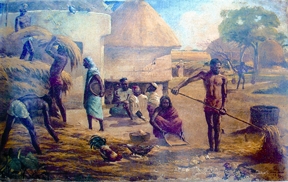 Zainul Abedin’s works throughout the fifties and sixties reflected his preference for realism, his aesthetic discipline, his predilection for folk forms and primary colours. Increasingly, however, he came to realise the limitations of folk art its lack of dimensionality, its flat surface, an absence of the intricate relationship between light and shade, and their lack of dynamism. As a way of transcending these limitations, Zainul went back to nature, to rural life, and the daily struggles of man, and to a combination of styles that would be realistic in essence, but modernist in appearance.

Zainul’s idea of modernism was not confined to merely abstracted, non-representational styles, but to a deeper understanding of the term ‘modernity’ itself in which social progress and individual dynamism are two leading components.

Thus the powerful figure of men and women struggling against man-made and natural calamities are a reminder of that essential idea of modernism: realising the limits of the individual. Zainul's works centralise men and women who labour and struggle against odds, and realise their potentials.

The 65 feet scroll painting (in Chinese ink, water colour and wax) Nabanna that he drew in celebration of the 1969 mass movement or the 30 feet scroll painting Manpura done to commemorate the hundreds of thousands who died in the devastating cyclone of 1970 show his dynamic style at work. Zainul, of course, painted nature and the human scene (including the private moments of village women), but his predilections for speed, movement and an interactive space are evident in the paintings of late sixties and seventies.

In 1975, Zainul Abedin set up a folk museum at sonargaon, and a gallery in Mymensingh (shilpacharya zainul abedin museum) to house some of his works. He became actively involved in a movement to preserve the heritage of Bengal, and reorient Bengal art to the roots of Bengali culture, as he felt the futility of unimaginative copying of western techniques and styles that modern art somehow inspired in a section of the local artists. His health began to deteriorate however, as he developed lung cancer. He died on 28 May 1976 in Dhaka. [Syed Manzoorul Islam]