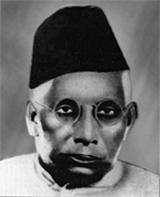 Ahmad, Nur (1890-1964) lawyer, politician. He was better known as Nur Ahmad Chairman. He was born on 25 December 1890 at Alkaran mahalla in Chittagong. His father Kazi Amjad Ali Sowdagar was a renowned businessman of Chittagong. His mother was Pearjan Bibi. Nur Ahmad passed Matriculation examination from Chittagong Municipal High School in 1910, FA (First Arts) from Chittagong College in 1912 and obtained BA (Hons) degree in Arabic and Persian in 1915. He got MA degree in History from Calcutta University in 1916. He was awarded the Chancellor Gold Medal for securing highest marks. He obtained BL degree in 1917 from the same University.

Nur Ahmad started his legal profession in Chittagong judge court. He was elected a commissioner of Chittagong Municipality in 1918. In 1921, he was elected chairman of the municipality and continued in this position for 33 years till 1954. He organised various development and philanthropic activities in the Chittagong municipal area including introduction of compulsory primary education in 1927. The year following, he introduced compulsory primary education for the girls and took up a plan for establishing primary schools in each of the areas. School inspectors were appointed for ensuring proper imparting of lessons by the teachers in the municipality administered primary schools. By dint of his relentless efforts, the percentage of literacy in Chittagong municipal area became the highest in undivided Bengal.

During his tenure, the number of primary schools administered by the municipality rose to sixty-two. In 1962, Alkaran, the then Administrator of the municipality, elevated the Municipal Primary Boys School to a secondary school, and renamed it after the name of Nur Ahmad. At a later stage these schools were gradually elevated to secondary level.

He established water works in Dampara with provision for water taps on the roads for ensuring supply of drinking water for the city dwellers. He also arranged for electric light posts in the streets. He made a massive development to the Municipal Public Library (1903) on the south bank of the Laldighi. He exempted the poor people of the town from paying municipal tax inspite of financial limitation of the municipality. His success as the chairman of the municipality mainly included the development of roads, excavation of canals, improvement of sanitation system and above all his control on law and order situation.

In 1937 Nur Ahmad was elected a member of the Bengal Legislative Assembly. During a short span of time he proved his worth as a competent parliamentarian. He had vital role in the enactment of Tenancy Act, annulment of sunset law, proposal of annulment of dowry system and in passing the Waqf and Debottar Property Act. He motioned the Homeopathic Bill in the Pakistan National Assembly, as a consequence of which Homeopathic Medical Board was formed. He had vital role in the establishment of Marine School in Chittagong.

The political career of Nur Ahmad began with his joining the Khilafat Movement. At a later stage he joined the Muslim League politics and continued to work with this party till his death. He was pious and non-communal.

In recognition of his social services the British government had a proposal to honour him with the title of 'Khan Sahib' which he refused to accept. The Government of Pakistan in recognition of his services to the society awarded him the title of Sitara-e-Khidmat with a monthly literary grant of Rs. 500. Nur Ahmad was well versed in Arabic, Persian, English and Urdu. Among his published books are: Forty Great Men and Women in Islam (1957); The Rising Islam (1958); Islam and its Prophet as Judged by the Non-Muslims; Holy Quran Science and Modern Knowledge; Education and Educational Problems; A Short History of the Muslim Historians, Travelers, Geographers and other Works (1957); East Pakistan as it is now and Some of its Urgent Needs and Problems (1966); Glimpses of Islam.