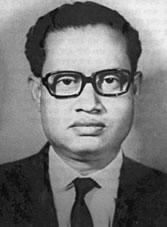 Ahmed, Shamsuddin3 (1920-1971) physician, martyr intellectual. Shamsuddin Ahmed was born on 1 August 1920 at Ambarkhana in Sylhet. His father Imanuddin Ahmed was an officer in Railway Department and his mother was Rasheda Begum. He passed matriculation examination in 1939 from Sylhet Government High School, ISc in 1941 from Sylhet MC College, and obtained his MBBS degree in 1946 from Calcutta Medical College. He got FRCS degree in 1962 from Royal College of Physicians and Surgeons in London.

With the army crackdown on the night of 25 March 1971, Shamsuddin Ahmed made extensive preparation for the treatment of the wounded patients coming to the hospital. He opened blood bank in the hospital and formed an emergency squad for the treatment of wounded patients. He gave active support and help to the freedom fighters, and supplied medicine to the young doctors working with the freedom fighters. An Italian team came to Sylhet on 8 April 1971 by crossing the Tamabil border. Dr Shamsuddin had a round in the hospital with this team to show how the Pak army was launching naked attack on the innocent people. His version against the barbarous atrocities of the army was recorded by the members of the Italian team, and was widely circulated throughout.

The army atrocities having been intensified in Sylhet town, the students, teachers and the doctors of medical college left the town and took shelter in suburban areas. Shamsuddin Ahmed released the female nurses to leave the hospital for safety. He along with Dr Shyamal Kanti Lala, nurse Mahmudur Rahman, ambulance driver Korban Ali and a few medical attendants remained in the hospital for attending the patients.

On 9 April 1971, a fight was ensued between the freedom fighters and the Pak army near the Sylhet Medical College. The freedom fighters launched attack on the enemy from the Bangallow of the civil surgeon on the nearby hillock causing the first jeep of the army convoy upset and killing three of them. The hospital area was instantly cordoned by the Pak army, and they ordered for vacating the hospital and adjacent areas. The guerilla fighters who took position inside the hospital campus dispersed.

'A group of Pak army under Major Riyaz entered the hospital. Finding no freedom fighters inside the hospital area, they carried Dr Shamsuddin Ahmed, Dr Shyamal Kanti Lala, nurse Mahmudur Rahman, peon Md. Muhibur Rahman and Mokhlesur Rahman, ambulance driver Korban Ali, and some others, numbering nine, out of the hospital and put them in a row at the lawn. The first gun shot targetted Dr Shamsuddin on his left thigh, and the second one struck him on the left side of his stomach, and the third bullet pierced through his chest, and he succumbed to death. All of his colleagues were killed by gun shots.

Dr Shamsuddin Ahmed along with others are laid to rest in the hospital compound.

Shamsuddin Ahmed, a dedicated physician, was a man of social consciousness devoted to the service of humanity. Earlier a scout leader, Shamsuddin Ahmed while a student of Calcutta Medical College formed a team of volunteers in 1946 and gave tremendous rescue and medical service to the victims of communal riot in Kolkata and in Bihar. While a Resident Surgeon in Dhaka Medical College (1954-1955) he formed the Pakistan Ambulance Corps and a number of relief squads and sent them to different parts of the country for relief of the flood-stricken people. In 1958, when small pox spread as epidemic throughout the country, it was by his initiative that the doctors and medical students formed several teams to work in the field to resist the spread of the epidemic.

Shamsuddin Ahmed was a man of philanthropic bent of mind, and was interested in literary and cultural activities. He had pioneering role in floating some social and cultural organizations. He was the president of Assam Muslim Student Federation (1941-1943). Dr Ahmed was the founding secretary of East Pakistan Medical Association, founding president of Pakistan Ambulance Corps, founder of Jalalabad Andha-Kalyan Samiti, founder of Sylhet Ambarkhana Girls' School, founder of TB Hospital, president of various mosque committees in Sylhet, a member of the Rifle Club.

The student hostel of Sylhet Medical College is named after him as Doctor Shamsuddin Hall.

The Postal Department of the Government of Bangladesh issued commemorative postal stamp in the name of Shamsuddin Ahmed on the Martyred Intellectual Day on 14 December 1997 in recognition of his sacrifice for the cause of the nation. [Muazzam Hussain Khan]