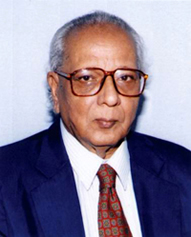 Ahmed, Syed Ishtiaq (1932-2003) jurist, lawyer. He was born on 18 January 1932 at Ghazipur in the United Provinces in British India. His father, Syed Zafar Ahmed, was a business entrepreneur and landowner at Hili in Dinajpur (West Bengal). Syed Ishtiaq Ahmed had his early education in Ramanath High English School at Hili and in Calcutta Madrasa. At partition (1947), his family migrated to East Bengal. Ishtiaq Ahmed passed Matriculation Examination from Mymensingh Zilla School in 1948 and Intermediate of Arts from Dhaka College in 1950. He obtained BA (Hons) and MA degrees in Economics from Dhaka University in 1953 and 1954 respectively. Ishtiaq Ahmed was called to the Bar and admitted as Barrister-at-Law from Lincoln's Inn in England, and simultaneously attained MSc degree in Economics from the London School of Economics in 1958. Thereafter he taught in a secondary school in England from 1958 to 1960.

While a student, Ishtiaq Ahmed was closely associated with the Mukul Fouz and Bratachari Movements. In 1946, he joined the agitation and protest rally at Kolkata against the capital punishment meted out by the British rulers to two Indian National Army officers, and was interned. During the Language Movement (1952) he was behind bars for two times. In 1953, he was one of the organisers of protestation against the ban on meetings of students by the then Pakistan Government. Ishtiaq suffered jail term for the third time in 1954 for opposing the imposition of Governor General’s rule in East Pakistan.

Since 1960, Syed Ishtiaq Ahmed practiced law uninterruptedly till his death. He also taught Law at Dhaka University as a part-time teacher from 1961 to 1968 and served the University as a senior legal adviser from 1972 to 1991.

He was appointed Additional Attorney General in 1972 and Attorney General in 1976. Ishtiaq Ahmed was twice elected president of the Supreme Court Bar Association (1978-79 and 1989-90). He was elected member and chairman of the Finance Committee of the Bar Council for two terms (1979-1982 and 1989-1992). Ishtiaq Ahmed was appointed chairman of the Company Law Reform Committee in 1977 and submitted a report with significant recommendations in 1981 on the reform of the Company Act of 1913. As an active member of the Bangladesh Institute of Law And International Affairs, he served as its alternate chairman from 1985 to 1991 and as chairman from 1992 to 2003. He was the founding member and chairman of the Bangladesh Legal Aid and Services Trust.

Syed Ishtiaq attended a number of international law conferences and seminars. He represented Bangladesh in the United Nations General Assembly in 1978. Recruited as a member of the International Election Observer Group he helped to monitor National Elections of Sri Lanka, Nepal and the Maldives.

His long legal career spanning over four decades earned him high estimation as an outstanding lawyer specializing in civil law and as a leading constitutionalist. His learned exposition of law in the court earned him what the Supreme Court often called about him 'amicus curie', to explain learnedly the most difficult and complex aspects of the legal understanding of the Constitution. Among the remarkable cases in which he proved his professional excellence mention may be made of the famous case of Anwar Hossain vs the State, better known as the 8th Amendment Case. By the 8th Amendment the integrity of the High Court had been compromised by creating several divisional benches at different parts of the country. Lawyers led by Ishtiaq Ahmed and a few others launched a relentless campaign against the measure. Consequently, the 8th Amendment of the Constitution was declared void in 1989. His piercing arguments on freedom of press in media suits connected with the government ban on the weekly Jai Jai Din in 1990 and in 1996, the weekly Robbar in 1990, the weekly Khoborer Kagoj and the daily Manob Jamin pursuaded the court to give their verdicts against the government.

Ishtiaq Ahmed acquired public acclaim for his stand in favour of democracy, rule of law, and independence of the judiciary. In the 1980s, he was one of the most outspoken activist in the struggle against the quasi-military rule of Hussain Muhammad Ershad. For his views, Ishtiaq suffered imprisonment once in 1983 and again in 1987.

After the restoration of the elected system in 1991, Ishtiaq played important role in effecting the constitutional change from presidential to parliamentary system of government. Similarly, he made very visible contribution to the idea and realisation of the neutral caretaker government. In recognition of his contributions to the struggle for democracy, the weekly Jai Jai Din honoured him with the 'Democracy Award' gold medal in 1995.

As an adviser to the Caretaker Government of 1996, Syed Ishtiaq Ahmed held the portfolios of Law, Justice and Parliamentary Affairs, Local Self-Government and Rural Development. In 2001, he again became a member of the Caretaker Government and was entrusted with the Ministry of Law, Justice and Parliamentary Affairs along with Civil Aviation and Tourism. His major contribution, this time, was his groundwork to separate the judiciary from the executive in pursuance of the constitutional provisions.

Beyond the busy schedule of his legal profession Ishtiaq Ahmed had active role in the social and intellectual arena. He was the president of the Rotary Club of Dhaka North (1970-1971), life member of the Bangla Academy, the Asiatic Society of Bangladesh, the Bangladesh Itihas Parisad, member of the board of trustees of Centre For Policy Dialogue and had liaison with many other like organisations.