Ali, Lt General Mir Shawkat (1938-2010) army officer, a sector commander in the War of Liberation, politician. He was born on 11 January 1938 in Dhaka. Mir Shawkat Ali had his early education at Mahuttuli Free Primary School in Dhaka. He passed matriculation examination from Armanitola Government High School in 1953 and ISc from Dhaka College in 1955. Then he joined as cadet in Pakistan Military Academy. Mir Shawkat Ali obtained BSc degree in 1958 and commissioned in the army. From 1955 to 1966 he worked at different regiments as Adjutant, Quarter Master, Company Commander and in military intelligence department. He fought in the Indo-Pak War of 1965 in Rangpur border. In 1971 he obtained PSC degree from the Command and Staff College in Queta and joined the Eighth East Bengal Regiment at Sholasahar in Chittagong. 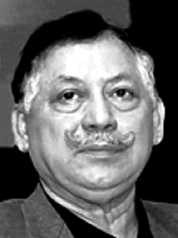 On 25 March 1971, Mir Shawkat was stationed in Chittagong with his unit. After the army crackdown on the night of 25 March, he revolted with the Eighth East Bengal Regiment and joined the liberation war as the second in command of the Regiment. After 30 March, he was placed in charge of the whole Regiment. He led the battle at Kalurghat in early April and continued his operations as the chief of the armed forces consisted of the army, BDR, students and the voluntary forces of Awami League till 2 May. After the fall of the Kalurghat defence position, he receded to Bandarban with his army. Then he established his headquarters at Mahalchhari and created resistance against the occupation army. In the face of severe attack of the Pak army, he crossed over the border through Ramgarh. Later he organized the freedom fighters at Chhatak and Sunamganj area and led the war.

On his retirement from the Bangladesh Army on 9 June 1981 as lieutenant general, Mir Shawkat Ali performed his duties as the Bangladesh High Commissioner to Egypt, Sudan, Germany, Australia, United Kingdom and Portugal.

He resigned from the post of High Commissioner in 1988 in protest against the dictatorship of the military ruler. Later he joined Bangladesh Nationalist Party (BNP) as president of Dhaka city unit. He was elected a member of the Jatiya Sangsad in 1991 from Lalbagh (Dhaka) constituency. He was included in the cabinet of Begum Khaleda Zia as state minister in charge of the Ministry of Food, and later a cabinet minister in charge of the Ministry of Labour and Manpower. He was also the vice-chairman of the national executive committee of BNP.

From 2007 Mir Shawkat Ali had been the vice president of Sector Commanders Forum, a platform advocating for the trial of 1971 war criminals and collaborators. He retired from active politics in 2007.

In recognition of his heroic contribution to the War of Liberation Mir Shawkat Ali was honoured with the state insignia of 'Bir Uttam' by the Government of Bangladesh. Besides, he was honoured with the President's Award twice in appreciation of his contribution towards sports and agriculture. Mir Shawkat Ali wrote his autobiography The Evidence in three volumes in 2008. He died on 20 November 2010 in Dhaka. [Urmee Hossain]