Angiosperm plant having seeds enclosed in an ovary. These plants are commonly known as flowering plants, characterized by the possession of true flower, occurrence of double fertilisation, vessels in the xylem tissue, and development of seeds from ovules which enlarges into a fruit. Angiosperms are also known as closed seeded plants. This plant group represents the dominant form of plant life on earth today. Angiosperms arose in the early Cretaceous period, some 120 million years ago, most probably in the tropical regions. By the end of the Cretaceous period, about 70-80 million years back, angiosperms had become dominant in most parts of the world. 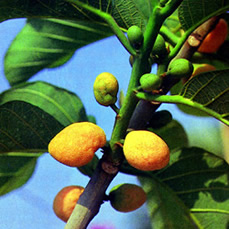 The group Angiosperms comprises about 2,35,000 species, by far the largest number of species in any plant group in the world. In size, the angiosperms range from trees well over 100 metres in height and nearly 20 metres in girth (eg some species of Eucalyptus in Australia) to simple, floating duckweeds scarcely 1 mm in length (eg Wolffia). The angiosperms make up much of the world of modern plants. Out of about 2,35,000 known species, only about 1,000 are of outstanding economic importance, and of these about 100 are of major importance in world trade, while only 15 provide the bulk of the world’s food crops: rice, wheat, maize, sorghum, barley, sugarcane, sugar beet, potato, sweet potato, cassava, bean, soyabean, coconut, peanuts and banana.

The estimated number of angiospermic species for Bangladesh is about 5,000, although David Prain in his Bengal Plants (1903) listed a little less than 2,100 species (dicot 1,524, monocot 557; total 2,081) for the area now under Bangladesh. However, by the end of 2000, 400 other angiospermic species were recorded (not listed in Bengal Plants and Flora of British India). In Bangladesh, the smallest angiosperm is Wolffia arrhiza (an aquatic herb, about 1 mm) and one of the tallest trees is Garjan (Dipterocarpus turbinatus). The bangladesh national herbarium arranged angiospermic specimens according to Cronquist's System (1981) and recorded 160 families under Magnoliopsida and 43 families under Liliopsida.

From a 314 ha area of Sitapahar forest in the Kaptai forest range under rangamati district, a total of 423 species of angiosperms (343 dicot and 80 monocot) under 292 genera and 93 families have been recorded. This indicates the richness of angiospermic flora in the reserve forests of Bangladesh. [Md. Abul Hasan and Md. Salar Khan]